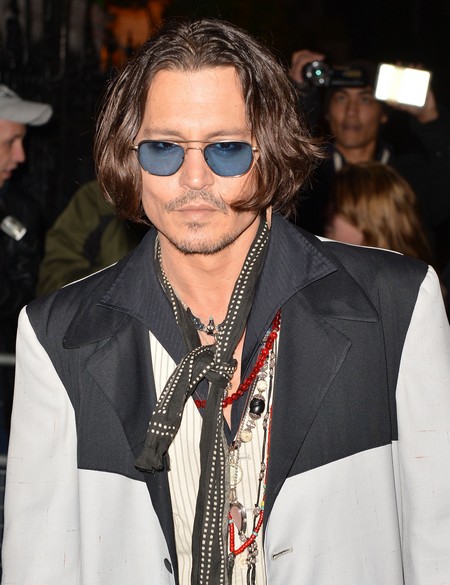 Johnny Depp is hot and heavy with self-proclaimed bisexual Amber Heard while Vanessa Paradis is heartbroken and out in the cold. A couple of months ago, CDL had already claimed that Johnny Depp and Vanessa Paradis were over. However, Depp has been telling people that this split rumor isn’t really true. So what’s the sitch? Are they still together or have they broken up already?

The two – Vanessa and Johnny – are rarely seen together.  Sometimes they are in the same city but they usually seem to be geographically separated throughout the year. While Depp had been intrigued with his alleged hookups with other girls such as Ashley Olsen, Amber Heard and Eva Green, Vanessa has kept mum about the matter.

Among the three girls linked with Johnny Depp, it was actually Amber Heard who is said to be sticking around for the affair. According to various tabloids, Depp and Heard are still seeing each other and is still having an affair.

The French singer Vanessa and the “Dark Shadows” star have been sort of married for around 14 years and has two children. Amidst the controversies, the two have not been seen together as a couple in any public appearance for over a year now – even for their son Jacks’s birthday party!!

Signs of a supposed affair between “The Rum Diary” co-star Heard and Depp may be the reason why Paradis has given up on her relationship with Depp.  However, both are still in denial even if the insiders from the “Diary” crew have claimed that the rumor about them splitting up because of the affair with Heard, is true. Heard has already announced recently that she’s bisexual and is currently linked with photographer-artist Tasya van Ree.

So far, there hasn’t been any picture of Heard and Depp together, to confirm the supposed affair but their recent sightings have so far been the core of the issue convincing a lot of people that Paradis and Depp had actually split up.

Here’s an excerpt from the Chicago Sun-Times regarding the alleged affair with Heard that might be our lead to the Depp-Paradis break up: “Last month there were also rumors that Amber and Johnny had a hot Las Vegas hookup, and Amber was even photographed getting onto Johnny’s private plane. I don’t even know. My guess is that Amber is bisexual, not full-on lesbian, and that she and Johnny did have something going, on and off, no strong commitments. Of course, I also think Johnny is in the midst of a full-blown midlife crisis, so I’ll believe pretty much anything.

In the meantime, Johnny continues to film The Lone Ranger, which has gone incredibly over-budget and weeks behind schedule. You can read more about it here – it sounds like Johnny is having some issues.”

Wow, Johnny! You really have a lot of explaining to do, now. So what do you think guys? Are Depp and Paradis still a couple or are they faking their relationship for the kids?  We say that Vanessa is just NOT GOOD ENOUGH for Johnny.  What’s your comment regarding this issue! Shoot your comments below!