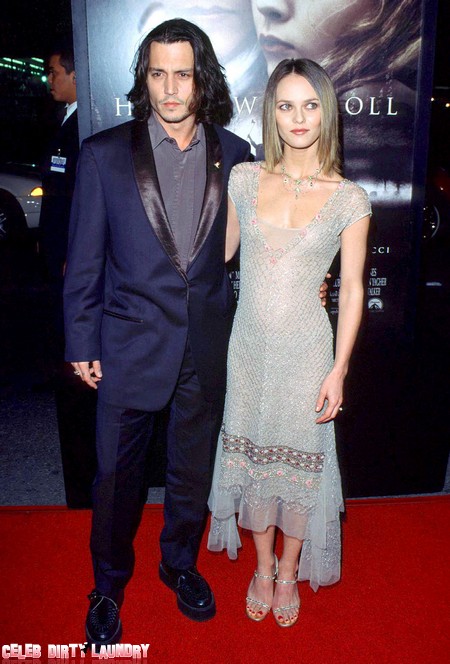 It has now been revealed that Johnny Depp and Vanessa Paradis have been separated for the past several weeks – and Johnny has stopped the booze to win her back. Rumors started a couple of months ago that there were serious problems between the two.  In fact Vanessa expressed her concern at the beginning of February that she believed thatJohnny was unfaithful with Angelina Jolie during the filming of ‘The Tourist.’

Vanessa blamed Angelina for ruining her de facto marriage to Johnny by sleeping with him during the filming.  It was widely reported at that time that it was all over but the crying between Vanessa and Johnny and that they were living sad and separate lives.  But Johnny has also been accused of having an affair with Ashley Olsen last month as you will read below.

Now GLOBE reports in the April 9th print edition that the Hollywood heartthrob is cleaning up his act in order to win Vanessa back:  ”Johnny wants to get back to being a low-key family man and decided he has to give up booze again to do that,” an insider says.

“Things started to go downhill a couple of years ago when he was shooting Alice in Wonderland .  He got into drinking a lot of wine and it started to cause problems.”

“When he is playing a character, he fully embraces it.  But it can make him very hard to handle if his character is wild, like in last year’s Rum Diary.  Booze was a big part of that movie and that pushed Vanessa even further away.”

Sources say that in November Johnny was spotted partying in a New York City nightclub, and in February he was seen leaving Olsen twin Ashley’s loft.

But now Johnny has quit booze cold turkey since he is playing Tonto in The Lone Ranger – and since Tonto is sober so is Johnny!   Now Johnny intends to use his new sobriety and stable behaviour to win Vanessa back.

Vanessa better hope that Johnny never gets cast as Casanova…