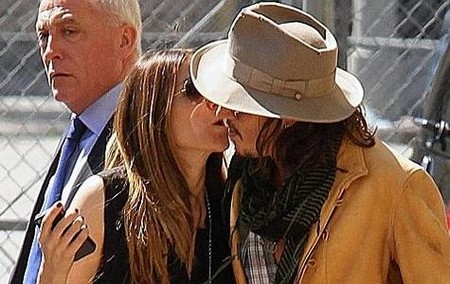 There has been lots of gossip recently about Johnny Depp and the speculation about his separation from Vanessa Paradis. As we reported on CDL, ‘Johnny was bored senseless and he wanted out of the relationship for a really long time.’ A pretty cruel accusation, but that’s not all that people have to say about old Johnny, they actually speculate that Johnny may have been having affairs with many other woman.

Even Johnny’s publicist, Robin Baum, is a candidate for having an affair with him, “Robin and Johnny spend a lot of time together obviously because of work but their relationship seems to be getting much closer than just business, Robin is twice divorced and a mom but she and Johnny really seem to have some kind of crazy connection that goes way beyond a professional level.”

“They travel a lot together for work and get to spend a lot of time together and they definitely have a total flirty vibe between them. I would put money on them having more than just a friendly relationship.” It would seem that people want us to believe that Johnny has practically slept with tons of women and if that were the case, I don’t think many women would mind!

I have to say that I can’t see Johnny Depp being this big time player, sleeping with all these women while he was ‘married.’ In my opinion, Johnny looks really shy all the time, when he’s not acting, every interview I see him in, he is very quiet. Besides, looking at Robin Baum, I don’t see why he’d have an affair with her, not being mean or anything but she’s not anything I’d consider as hot hottie hot or even a bit hot. But you know; whatever bloats your goat I guess.

One thing is for sure, Johnny Depp is now single and a ton of women around the world couldn’t be happier!