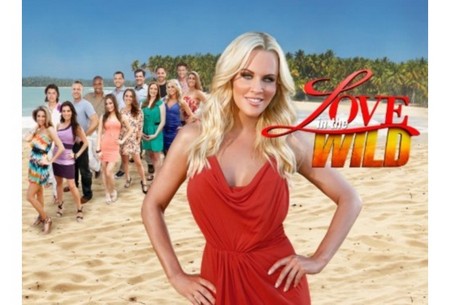 Tonight on NBC is the much anticipated finale of Love In The Wild. On tonight’s show it’s down to the final two couples, do you think Jenny McCarthy will be tweeting again tonight during the episode?  If you want to get a little sneak peek into tonight’s final episode, you can read our preview & spoilers HERE.

Last week, Ken dismissed Ben & Michelle’s 30-second advantage because he thought they were one of the weakest couples in the game. All the couples were aware that winning the challenge would guarantee them a spot in the challenge, so it was “game on”.  The couples had to dig for gold, but first they had to assemble a map to find one of three treasure chests. The couple to win the challenge not only guaranteed themselves a place in the finals, but they also got to decide which couple to send home.

Ken and Yanina were the first couple to arrive at the finish line with Chase and Summer coming in second, this leaves Ben and Michelle third. In the end, Ken and Yanina decide not to have a competitive finale, they choose Ben and Michelle to compete with them. Summer and Chase would have been fierce competitors and this is really about love more than a competition, isn’t it? All hope is not lost for Summer and Chase, they told Jenny that they plan on continuing their “connection” back home.

On tonight’s episode, the season finale’s competition rises to an all time high when the couples have to get through an overnight quest through some swampy rice fields. There will only be one couple left standing tonight who will win the cruise around the world.

RECAP: Tonight it is down to the final two couples, who will win the cruise around the world; Ken and Yanina or Ben and Michelle? Ben and Michelle have a crazy physical attraction, but can all that passion help them win the game? Meanwhile, Ken is wondering if its his last breakfast with Yanina but he’s ready to kick some butt.

The couples arrive on the beach to meet Jenny who tells them they are going on an overnight trip in a mysterious jungle adventure.

Communication is everything and what they need to do right now is decide who is better at giving directions and who is better at receiving them. The men decide that they give better directions, they have to put on back packs and get in the back of a truck, while the women wait with walkie-talkies for further directions.

The men also have walkie-talkies and a map, they need to guide the women. Clearly this is going to be difficult, but Ken is not worried in the least. Ben is the one who decided that he would give the directions and now he admits he is not good with a compass.

Ken and Yanina seem to be doing very well, while Ben and Michelle are all over the place and now Ben admits that he is also not good at math.

Yanina has found three objects while Michelle is becoming nasty because Ben completely sucks at his navigating skills. Ken is thrilled, Yanina has the three items which now allows them to open the crate, it’s a two person bike inside that they have to put together and then drive to another point.

Both couples are finally on their bicycles with Ben and Michelle trying to catch up. The teams have dropped their bikes and they are now searching for supplies, Yanina choosed the practical things and Ken was favoring the luxury items. Ken and Yanina are still in first place, they have a long trek before they can make camp for the night. Ben and Michelle are still trying to catch up, they are now only 5 minutes behind. Both teams have finally reached their camping destinations and prepare themselves to spend a night in the wild.

In the morning, Ken manages to brew some coffee and then they are off. Ben prepared some oatmeal that Michelle says looks like caulk, they depart 5 minutes after Ken and Yanina. The first thing the couples have to do is decipher a crypted message on a stone, then they have to build a kayak and head in the water to retrieve a crate.

Yanina and Ken are off in the water with Ben and Michelle hot on their trail. Ken and Yanina are still in first place, but barely.  Yanina is tired of paddling, Ken keeps his cool and tries to keep her motivated. They arrive at the crate, ken jumps in the water to get the crate and forgets to secure himself to the kayak, all of sudden he is separated from Yanina.

Ben and Michelle got a little bit of a lead, Ken and Yanina are having a hard time and Ken feels like he has blown everything.

The couples arrive on the beach and they are trying to pry open their crates to retrieve the statue that they have to bring to Jenny. Ken and Yanina are the first team to arrive at the finish line and win “Love In The Wild”. The couple have been together since day one and they are going on a romantic trip around the world. Ken and Yanina admit to having found “Love In The Wild”.

Michelle and Ben are the second couple to arrive at the finish line, but Ben declares himself the winner because he has found Michelle.

Ben and Michelle are still together and she hopes to visit his family soon in England.

Ken and Yanina are excited about their trip around the world and every weekend they fly to see each, they believe they are destined to be together forever.