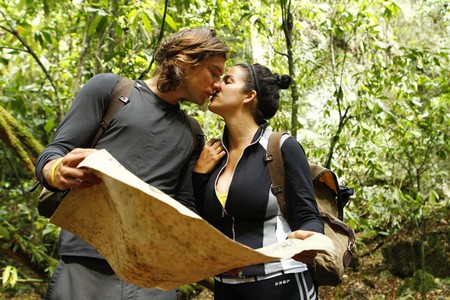 Tonight on NBC is the finale episode of Love In The Wild, hosted by Jenny McCarthy and it’s down to the two final couples: Ken, a Miami real-estate developer, and Yanina, a former “Ice Girl” for the Chicago Blackhawks, against Ben, a 27-year-old U.K. native who now lives in North Carolina, and Michelle, an outdoorsy girl who is “on the prowl” and looking for love; they are all very much together as couples, even after the show which was hinted by Jenny. The winners will be named this evening, only one couple will jet set around the world.

There will be lots of mental and physical torture as the two teams go head to head in the hopes of winning the ultimate trip around the world.

In the finale preview, the couples go on an overnight quest that involves rice fields and rough waters, it appears that Ken and Yanina are doing well, is this just a sneak peek to through us off? Ken has been a force to reckon with from the beginning, but will Yanina’s sweet adorable personality be their downfall? Ben and Michelle don’t appear to be in the lead, could it be that Ben is loosing his cool again, ’cause it wouldn’t be the first time! Ken appears to be an expert navigator in the final task, while on the other team, Michelle can’t see what she is looking for under her false eyelashes and Ben couldn’t navigate himself out of a paper box. Meanwhile, Michelle blames herself for their failures during the task, little does she know that Ben doesn’t know how to navigate and sucks at math.

How do you think the finale will play out, are your rooting for Ken and Yanina or Ben and Michelle?

Enjoy the preview and don’t forget to come back to CDL for our live coverage of the show Tuesday night at 10PM EST! Meanwhile, hit the comments and let us know what you think of Season 2 of “Live In The Wild”!