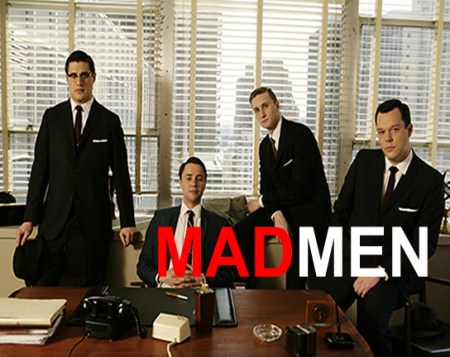 A new episode of AMC’s hit show Mad Men airs tonight on AMC and it’s the season finale of the 5th season. Tonight’s episode is called “The Phantom”. Stand by as we cover the episode with all the up-to-the-minute details.

On last week’s episode, Joan notified everyone that Jaguar wants to work under a fee schedule, Roger was open to the idea but Don wanted absolutely nothing to do it, he wanted to stay on commission. Don’s daughter Sally started her period, but I don’t think we really needed to know that, did we?

The pressure kept building with Lane, keeping up with the pretenses with his wife just became too much and he hanged himself in the office. Don was shocked that Lane was dead in his office and wouldn’t wait for the coroner to arrive, he had help to take his body down, out of respect. Did you see the episode? If you missed it, you can read the full recap HERE.

Tonight is the season finale and the season ends with opportunities for everyone in the agency while Pete meets an interesting stranger on a train. The episode is called “The Phantom” and appropriately so since Lane’s memory will hang over the office like a phantom having killed himself in his office. Now predicting a “Mad Men” plot for the finale would make me a fool because they are always edgy and love to surprise viewers, so like you, I will wait for tonight wondering how they can possibly get more dramatic than Lane hanging himself in the office?.

We will be live blogging the episode with all the up-to-the-minute details so make sure to come back to this spot and watch the show with us at 10:00pm. Make sure to refresh often so you get the most current info! While you wait for the episode you can catch a sneak peek of tonight’s episode below.

RECAP:Recap: Don walks in to find Megan and her mother, Marie, who is visiting, he is late so he leaves quickly for the office. Megan’s mom is there and she tells her to not hide things from Don: Megan received a letter that she didn’t tell them about.

Pete meets Beth and her husband on the train, but Beth makes an excuse to go for a smoke and quickly leaves with her husband in tow.

Joan meets Harry in the elevator; he tells her that if they get more space in the office, he wouldn’t mind taking advantage of it.

Don arrives at the office and sees Adam who gets into the elevator and leaves. The team is pitching Topaz, Marvin doesn’t like it, Don walks in and doesn’t like it either.

Pete gets a call, it’s Beth and she pretends to be his sister-in-law to get through to him. She tells him to meet her where he wanted to meet her before, at the hotel.

Peggy is at her new job, she is giving a new campaign for women’s cigarettes.

Joan is in a meeting with the partners and tells them that this quarter has been there most successful with next quarter is also looking promising.

Pete arrives at the hotel to meet Beth, she greets him with a hug. She tells him that she is very blue and the doctors think the only treatment for her is electric shock. Pete starts kissing Beth and he is lost, they have sex.

Megan is working with Emily and the phone rings, it’s a wrong number who keeps calling. Megan’s mother walks in and announces that she is going out in front of Megan and her Emily.

Pete and Beth are still in bed, she tells him that she should go but he doesn’t want her to.

Don arrives home, he goes right in to change for dinner and Megan follows him into the bedroom. She tells him that Emily told her that the firm is doing “Butler Shoes” and it wouldn’t be right if she didn’t ask, she wants him to put her name in for the part for the commercial. Don is surprised that Megan would want this, because it’s a commercial, it’s not art. Don asks her if she realizes how hard it would be for him to ask Butler Shoes to hire his wife.

The phone rings, Don takes it and it’s Roger, he pretends to be Emile and asks to speak to Marie. Marie goes in another room and talks to Roger, he inviters her to his apartment and promises to be very discreet.

The next morning, Don arrives at the office and Joan is there to meet with him; she wants to reopen the conversation about more space. Joan hands Don a cheque for $175,000.00 from the death policy for Lane and she feels bad that she didn’t give him what he wanted when he was alive. Don is really not feeling well, he’s got a bad tooth.

Don goes to visit Lane’s wife and brings her a cheque which was Lane’s portion of a collateral that all the partners had put up. Mrs. Pryce goes off on Don and tells him off, she shows him a photograph of a woman that Lane had in his pocket and demands to know who it is. Don has no idea who the women in the photo is, then she tells him to not think the $50,000.00 will take away his guilt, Don leaves and she slams the door.

Pete arrives at home, his wife Trudy has the plans for the pool that she wants to be put in. Pete tells her that their son could drown in the pool and she tells him that she is fed up with all this doom and gloom.

Roger is with Maria, they both kiss and fall onto the bed, she tells him not to ask anything of her, except sex of course.

Don arrives home and Megan is drunk, she falls on the floor and he helps her to the bed. Megan wants to have sex with him because she tells him, “this is what he wants”. Megan feels that she is terrible for anything outside of bed, Don tells her to sleep it off. Just then, Maria arrives home and Don asks her how she could have left her daughter like that. Maria tells him that she is his responsibility, she excuses herself. Don’s tooth is really painful, the next day he heads to the dentist and takes care of it. While under the anaesthetic; Don sees Adam again, he asks him not to leave him, Adam tells him that he will be “hanging around”.

Beth is in the hospital, Pete comes to visit her, he pretended to be her brother to get in. Pete tells her that he was really worried about her. He then goes on to tell her that his friend got involved with another man’s wife and there are complications; he needs an adventure, that all this aging was worth it. But then, without this women, he is heart broken and his life with his family is just a temporary bandage. Beth tells him not to worry, things will work out.

Don goes to a movie, he meets Peggy in the theatre and she gives him a big hug. Peggy tells Don that everything is going well, he tells her that he is proud of her. She goes on to tell him that they are going after that women cigarette that he was after which will be sending her on a plane to visit the factory.

On the train, Pete meets with Beth’s husband, Howard, who tries to convince him to get off the train to go for a little fun, meaning women. Pete calls Howard disgusting; just then, Howard figures out that Pete slept with Beth and says something about Beth will spread her legs for anyone. The two get into a fight and Pete is going to get thrown off for being rude and fighting.

Pete gets home and he has a black eye, he tells Trudy that he fell asleep and fell into a ditch. Trudy tells him that she can’t live like this, she wants to find him an apartment in the city so he doesn’t have to travel home everyday.

Don is watching a screen test of Megan and smiles to himself.

Joan found some new spaces for the partners and shows it off to them.

Megan is all dressed up for the part, she can’t believe it is happening, Don is on the set and she kisses him before going on.

Don goes to the bar for a drink, Peggy just finished her – shower looks out her window to see two dogs going at it, Pete is listening to music with his headphones on, Roger is naked in front of his window and looks like he is meditating. Don gets hit on by a women in the bar, she asks him if he is alone and that is it for season five.