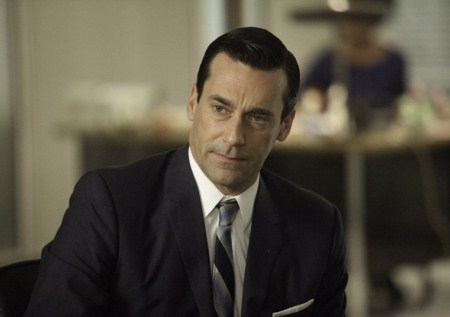 A new episode of AMC’s hit show Mad Men airs tonight on AMC and it’s the second to last episode of the 5th season. Tonight’s episode is called “Commissions and Fees”. Stand by as we cover the episode with all the up-to-the-minute details.

On last week’s episode, Joan slept with Herb from the Dealer’s Association to get the Jaguar account. In return, she was made a voting partner with 5% of the business. Stress between Megan and Don continued, her new career choice is clearly getting between them. Meanwhile, Trudy is kind of figuring out that her marriage to Pete is just not working out and Peggy quits.  If you missed the episode you can read our full and detailed recap HERE.

In tonight’s episode Sally chooses not to join her family on a skiing trip and instead spends the weekend in Manhattan where she is reunited with her childhood friend Glen Bishop. Meanwhile, Sterling Cooper Draper Pryce receives some welcome news, but fiscal controller Lane Pryce’s life reaches a turning point while Don receives an intriguing lead and follows up on it.

We will be live blogging the episode with all the up-to-the-minute details so make sure to come back to this spot and watch the show with us at 10:00pm. Make sure to refresh often so you get the most current info! While you wait for the episode you can catch a sneak peek of tonight’s episode below.

RECAP: Don is getting his hair cut with Mr. Covington walks in and acknowledges that Don won the Jaguar account and recognizes that it is a big win for their small firm.

Lane meets with the four A’s, they offer him a professional lead, he accepts but tells him not to expect any miracles.

Don’s ex calls him, Sally doesn’t want to go on a skiing trip so she is dropping her off in an hour.

Cooper comes in to see Don and brings him a cancelled a cheque that has Don’s signature on it. He is upset that Don gave Lane a bonus. Don calls in Lane and presents the cancelled cheque to him, he asks what the hell it is. Lane acts insulted, Don tells him that he is giving him a chance to come clean.

Lane tells Don that he lost money on taxes and did it because it was only a loan for thirteen days. Don tells Lane that he is going to need his resignation. Lane goes on to say that he his remorseful, but Don sees it as embezzling funds and forging his signature. Don is going to do the decent thing; he is going to let Lane resign. Lane goes on to say to Don that he has no idea what $7500.00 meant to him, he starts crying. Lane finally composes himself and Don tells him this is the worst part, it will get better.

Lane goes to see Joan, she congratulates him on the four A’s. She then goes on to discuss her wanting to take a vacation and Lane says something inappropriate about her in a bikini, Joan tells him to take his party elsewhere.

Don is in Roger’s office, he tells him that he is tired of this delusion that they are going somewhere when they can’t even give Christmas bonuses. Don doesn’t want Jaguar, he wants Chevy. Don tells Roger to fire Ken Cosgrove if he won’t leverage his family for SCDP’s benefit.

Stella arrives at Don and Megan’s apartment and Megan is surprised, she had no idea that Stella was going to stay for the weekend.

Roger meets with Ken and tells him that he is going after his father-in-law. Ken wants to be a part of the account if Roger gets it and he doesn’t want Pete involved.

Don meets Roger in the elevator, he tells him that they are meeting with Dow on Monday morning. Don wants to know if it is a serious meeting and Roger tells him it is.

Don gets home and finds Sally there, Megan is in her room and when Don goes into see her she is upset that he didn’t call her. Don interrupts Megan and tells her that he had to fire Lane for stealing money from the company and she can’t tell anyone.

Lane arrives home and his wife is dressed up and tells him that they are going out to dinner. Lane is drunk and doesn’t want to go, but she doesn’t take no for an answer. In the underground parking, she shows off a new car that she has bought for him and Lane looks like he is going to faint. All of a sudden, Lane starts to vomit.

Don is preparing for his meeting, Megan takes Sally out.

Lane’s wife is surprised that he wants to spend the weekend home working and not go out for a drive in the new car.
Megan and Sally are out to lunch with on of her

Sally is on the phone with her friend Glen, she wants to meet with him so they plan to meet the next day. Megan goes to her casting call and leaves Sally alone, but doesn’t realize she is expecting company. Her friend tells her that he told his friends that he was going to have sex with her, even though they really aren’t.

Lane tries to whack himself off in the Jaguar with carbon monoxide poising, but he fails. Then he heads into the office and is typing a letter, I think he is going to kill himself.

Roger and Don are at the meeting, Ed asks Don what is so urgent. Don tells him that he feels that he is in desperate need of change.

Sally went home, she started her period and didn’t know what to do, Betty tells her it is ok they will take care of it. (we really didn’t need to see evidence of this, did we?)

Don tells Dow Corning, success is temporary and Ed brings up his anti-tobacco letter again. Don basically slams Ed and his team with this whole “what is happiness” thing, then he and Roger conclude the meeting.

The next day, Glen arrives at Megan and Don’s apartment; he is looking for his bag. Megan interrogates him, he tells her they just went to the museum, he just wants his bag. The phone rings, it’s Betty and Sally made her way home and Betty tells her why.

Joan tries to get in Lane’s office and for some reason the door is jammed. She goes to see Pete and when he looks over the wall, he sees Pete’s body.

Sally is home with her mom, she is so embarrassed and doesn’t want to talk about it but Betty gives her “the talk” anyway.

Roger and Don arrive back in the office to find a somber team, Lane hanged himself in the office and the employees don’t know because Cooper sent them all home. The coroner still has not arrived, Don is shocked, he doesn’t want to leave Lane like that. Don forces himself into the office, with Roger and Pete and tells Pete to get something to cut him down.

Peter cuts the cord while Roger and Don take down the body. Roger finds a note, they leave the office. The letter is addressed to his partners, it’s a resignation letter. Don is clearly very upset, he goes home to find Megan with Glen in the living room. Glen tells Don that they met before, he met his mother Helen Bishop. Don tells Glen that he is driving him home.

In the elevator, Glen asks Don why does everything always turn out to crap, Don tells him he is too young to talk that way. Don then asks him if there is anything he wanted to do, what would it be. The next minute, we see Glen driving the car and Don watching on.