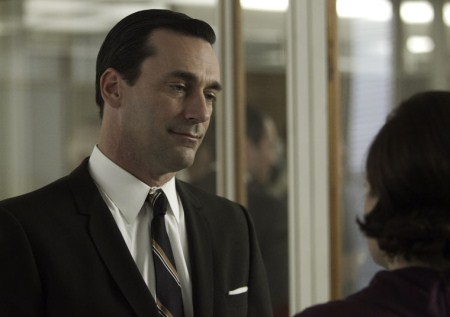 A new episode of AMC’s hit show Mad Men airs tonight on AMC.  Tonight’s episode is called “The Other Woman”. Stand by as we cover the episode with all the up-to-the-minute details.

On last week’s episode, Lane did the unthinkable, he forged Don’s signature on a check because he was desperate to pay some back taxes. Everyone finds out that they have the Jaguar account and will be working through Christmas, but they still get their Christmas bonus. Harry meets with Paul Kinsey who is now a part of Hare Krishna, Harry has sex with his girlfriend and ends up giving him money and telling him to leave town and make a new life for himself.

Joan gets served with divorce papers and Don consoles her because she is very upset. Megan and Don’s relationship is really strained, Don wants her back in the office and Megan is determined to pursue her acting career.  If you missed the episode you can read our full and detailed recap HERE.

On tonight’s episode Don deals with a challenging pitch and Peggy is thinking about taking a trip. Pete and Trudy’s marriage is finally going to blow wide open when Trudy tells Peter that she wants to stop playing games. Ken gets upset because of an ad being pulled and Burt is upset about something someone said. Now, while Megan thinks that having a wife is like a Mercedes for a man, Don seems to be flirting with another woman? Last week Don was doing some pretty heavy flirting with Joan, is it her, or someone else?

We will be live blogging the episode with all the up-to-the-minute details so make sure to come back to this spot and watch the show with us at 10:00pm.   Make sure to refresh often so you get the most current info!  While you wait for the episode you can catch a sneak peek of tonight’s episode below.

RECAP: Don is in the boardroom with all the men, they are trying to throw ideas around for a slogan for Jaguar but he’s not impressed and takes a break.

Peggy sees Don and asks him to sign off on something, but he gets diostracted when Joan arrives with lunch.

Pete and Ken meet with the Herb from the Dealer’s Association and he tells them that he wants them to go the extra mile, which means introducing him to the hot red head (Joan) at their office. All he is saying is that if it happens, it will make him happy.

Megan is at home, she waited up for Don; she’s practicing for a part. Don tells her that he is going to watch Carson then go to sleep. Megan wants him to talk about what is going on at work, he gives her the slogan they are thinking of, basically that the Jaguar is a mistress.

The next day, Pete goes to see Joan and tells her that he has bad news. He met with Herb from the Dealer’s Association and he wants something unorthodox, he is crazy about her and he doesn’t go out with her they will lose the account. Pete tells her that he wants her to break the news to the company that they are going to lose the account. Joan is upset because she is married and Pete is talking about prostitution.

Peggy is in Harry’s office with Ken, she comes up with a slogan.

Pete calls the partners into the office and tells them that Herb wants to go out with Joan or they will lose the account. The partners don’t all agree with Joan, but in the end Roger and some of the other guys realize this is a dirty business.

Don still hates the ideas the guys are coming up with, so he goes to his office to have a drink. Peggy, Harry and Ken go to see Don, they tell him that Peggy just came up with an idea for Chevalier Blanc. Don is not impressed and doesn’t want her to get credit for it, which means a trip to Paris. Don is rude and throws money at Peggy and tells her to go to Paris.

Lane goes to see Joan, he gives her proposition, a huge sum of money, four times what she makes in a year in exchange for her to meet with Herb.

Pete is at home reading with his son, when Trudy walks in.

At the office, Megan arrives to see Don – they go into his office and she locks the door so she can seduce him.

Pete is cranky with Trudy, he tells her that he is exhausted and Trudy is upset that she is dressed provocatively and he doesn’t even notice. Trudy feels that she is lucky to have even one child with him and they probably will never have another one.

Joan gets home and her mother starts giving her a hard time, she tells Joan if she doesn’t like she could always get herself a colored girl because they like to be bossed around.

Megan tells Don if she gets this new part, she might have to leave for three months. Don tells her to forget about it because that is not going to happen. They scream at each other and she leaves.

The next day, Joan makes an appointment and meets with Pete. She wants a partnership, 5% of the business and the paperwork better be ready by the end of the day.

Micheal goes to see Don and gives him a new Jaguar pitch, “Jaguar at last, something beautiful you can truly own.”

Peggy is at lunch with a friend in advertising and confides in him about the Jaguar pitch. He gives her advice, tells her that in any other company she would shine.

Pete goes to see Don, he tells him that Joan is getting 5% as a voting partner for what she is going to do for the Jaguar case. Don is furious and tells Don he doesn’t work like that, he leaves the office and heads straight to Joan’s house.

Don tells her it is not worth it, if they lose the account who cares. Joan is surprised because she was told everyone was on board, but Don tells her that he wasn’t.

The next day, Don and the partners pitch their slogan. Meanwhile, we see Joan visiting Herb, he gifts her with an emerald necklace, then they have sex and you can see that Joan is really disturbed.

Don and the partners are back at the office and Joan asks him how it went, he tells her he doesn’t know yet and when he asks her if she would like to join him for a drink, she says maybe later.

Megan goes for her audition, there are three man and they want her to turn around so they can get a good look at them.
Peggy meets with a guy from Cutler, Leeson & Shaw, she is job hunting and he wants to know why she would even consider playing for the other team. Peggy tells him that his is no game and she is prepared to leave. He wants to know how much she is looking to get paid and she writes $18,000 down on a piece of paper, he takes it and puts higher, he is offering her $19,000.

Megan is home and Don walks in, he wants to know how it went today and she interrupts by asking him how it went with Jaguar. He tells her it went good, but he doesn’t know yet.

The next morning, Don arrives at the office to find out that Peggy wants to see him but something is going on with Jaguar and distracts him.

Don and the partners, including Joan all go into an office when Roger gets a call from Herb, they got the Jaguar account.

While everyone celebrates, Don goes to speak to Peggy. They share a drink and Peggy tells him that it is serious. Don tells her that he can’t put a girl on Jaguar, then he lets slip that Joan is a partner. Peggy tells him that the day he saw something in her, her life changed. She goes on to say that it has been her pleasure to work with him, but she has reached a point where she needs to have a new experience. She gives him her notice, a customary two weeks, she is leaving. Don tells her that he knows he has been taking her for granted and is willing to discuss a raise, but Peggy tells him that she wants to move on. Don tells her that she doesn’t have to wait the two weeks, she can leave right now because he has support. He kisses her hand and she starts to tear up, she then tells him not to be a stranger and leaves.

The celebration is still going on and Peggy gets her things, at the elevator Joan sees that she is leaving and Peggy has a smile on her face.