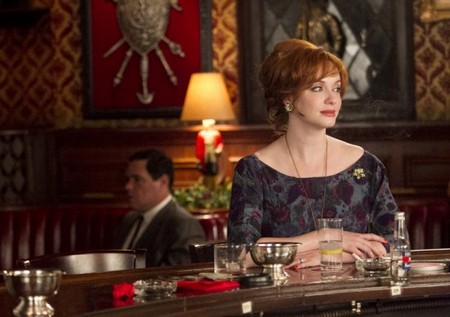 A new episode of AMC’s hit show Mad Men airs tonight on AMC.  Tonight’s episode is called ‘Christimas Waltz’. Stand by as we cover the episode with all the up-to-the-minute details.

On last week’s episode Betty was on a diet and going to Weight Watchers.  Betty is jealous of Don and Megan and when she saw them together she went home and dumped the Reddi-Whip into her mouth.   Meanwhile Roger got Jane to help him with a new client Manischewitz wine and ends up sleeping with her again and Megan says Roger has ruined another place for her.

Betty tried to cause trouble between Megan, Sally and Don by dropping info to Sally about Don’s first wife Anna.  However, it did not have the desired effect and Sally realizes Betty was trying to hurt Don and Megan.  If you missed the episode you can read our full and detailed recap here.

On tonight’s episode Christmas proves rewarding to many at the agency; Harry does a good turn for a friend.  Pete Pete gets snarky with Don and comments,  “you may have to stay past five thirty.”

RECAP: Lane is in desperate need for money to pay back taxes. He uses projections to get a bank loan for the company and lies to the partners there is a surplus.

Harry Crane is in his office and Lane comes in, he wants to discuss the first quarter media projections. Lane looks at the folder and it looks very promising, but he’s not really telling the truth.

Pete meets up with Roger and Don, he tells them that Lane’s “fool” at Jaguar has been fired, so SCDP is back in the run for that account. Pete’s put out when nobody’s that thrilled.

Harry has lunch with Paul Kinsey, who is now bald and wearing a robe for Hare Krishna, the first thing Harry asks, “what the hell happened to you”. Paul wants Harry to keep an open mind, he walks into a room and their are other guys wearing robes and they all begin to pray. Everyone begins to chant, Harry joins in.

Pete is in the boardroom with Don and Lane who goes on about the surplus shares. Pete tries adds that they are in the running for Jaguar, but Lane gets right back to the bonuses, but they are being delayed.

Roger walks into the office with a festive shirt and is a little loud, Joan tells him to be quiet. Roger talks to her about the support he pays and assures him that he is going to keep it up but she is not impressed.

Meanwhile, Harry is right into the chanting and can’t believe he stayed as long as he did. Harry is hungry, so Paul is going to take him for something to eat. In the car, Paul tells Harry he joined the movement because he felt he had hit rock bottom. Now, he wants to make a life with his girlfriend, mother Lakshmi, but she won’t leave.

Don and Megan are at a play, you can see that Don is not impressed. At home, Don wants a drink and tells Megan that he is tired. Don tells her that he fells her friends made fun of him at dinner and he is not happy about it.

Harry and Paul are at dinner, Harry admits that he had a vision during the chanting. Paul gives Harry a script, he has written about Star Wars.

It’s late, Lane sneaks into the office and forges Don’s signature on a check that he makes out to himself, this guy is really desperate.

Joan gets served with divorce papers and then rips into the receptionist for letting the guy in, she calls the girl an idiot and Don intervenes and removes Joan from the area. To clam Joan down, Don takes her to look at Jaguars. They want to take the XKE for a drive, the saleman tries to tell them no and Don writes him a check for 95% of the sale price, tells him if they don’t return, to cash the cheque. Don takes Joan for drinks, she tells him that she is furious that Greg is divorcing her. Joan complains because before when someone came to the office, it was mostly to deliver flowers. Don tells her that she will find someone better and Joan says just like Don did.

At the office, Harry gets a visit from mother Lakshmi, Paul’s girlfriend. She tells him that when he was chanting, she felt an intensity everywhere in her body, especially one place, she kisses Harry. She tells him that she is burning for him and asks if his wife burns for him. She goes on to say that it is completely allowed in her religion and bends over the desk, tells Harry to take her like that and he unzips his pants.

There’s music playing in the bar and Don asks Joan to dance, but she says no because they have both drank a lot. Don points out to her that there is a guy looking at her and he would probably dance with her. Don leaves and leaves Joan there, but leaves her cab money to get home.

Don takes the Jaguar and starts speeding. Meanwhile, at the office Harry’s heart is beating like a rabbit, mother Lakshmi tells him that she did this for the movement. Harry explains that Paul wants a life with her and she says that’s not possible. Harry is confused, why did they just have sex. Mother Lakshmi tells him that he is to stay away from Paul from now on and tell Paul the truth, the script is terrible.

Don gets home and Megan is waiting for him at the dinner table. She is upset that he is drunk and left work at lunch, she takes a plate and smashes it. She is furious, she had a plate warmed and has been waiting for him. She demands for him to sit down and have dinner with her. Megan tells him that he used to love his work, even before he met her.

Roger arrives with flowers for Joan, but they are not from him.

Harry meets with Paul at a restaurant, he lies to him and says that “they” loved his script and has a future. Harry gives him an envelope filled with five hundred dollars and tells him to go west to pursue his dream. Paul is happy, Harry is the first person to do something for him.

All the partners get together, it’s official, Mohawk is on strike and there will be no Christmas bonuses. They then get in front of the employees and Lane announces to everyone that Mohawk is on strike, this has caused a huge financial strain on the company and therefore, well Roger cuts in, the employees get the bonuses but the partners don’t. Pete then tells everyone that they will be working on the Jaguar account, Don jumps in and tells them to be prepared to take a big leap forward, they are going to celebrate Christmas together and the New Year to work on the Jaguar account.