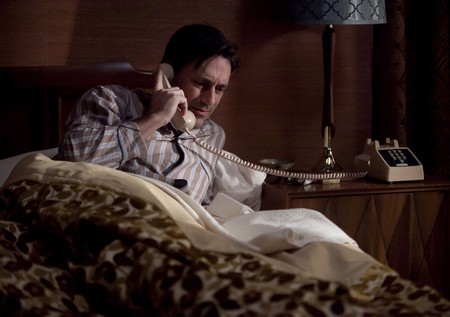 A new episode of AMC’s hit show Mad Men airs tonight on AMC.  Tonight’s episode is called ‘Dark Shadows.’‘ Stand by as we cover the episode with all the up-to-the-minute details.

On last week’s episode Peggy is irritated by a secret she has to keep. Pete covers for a friend and Don gets unexpected news. . While Pete has to make a phone call, Peggy looks to be dreading one.  Megan decided to quit Sterling Cooper Draper Price.  If you missed the episode you can read our official recap here.

On tonight’s show Don becomes competitive and Roger seeks new business. Sally faces a challenge. I wonder if Sally’s challenge be about Glenn?

Betty is on another diet, we find out she is at Weight Watchers. Pete tells the guys that he has an in with someone at the New York Times who is writing an article about agencies and Pete is confident he can get them in.

Roger gets interrupted on the phone by Bert who tells him to call Max Rosenberg a potential client for Manischewitz wine. Bert does not like Pete so he tried to con Roger by telling him the account requires his finesse.

Megan is trying our her acting tips with Sally and she teaches her how to cry it looks like the two are becoming friends.  Don makes himself scarce.

Betty get to the house to pick up the kids and when she gets there she comes into the apartment and looks around.  She sees Megan dressing and she gets upset.

Betty is so upset she heads home, runs into the house and heads to the fridge for some Reddi-Whip which she squirts right into her mouth.  She thinks better of it and spits it into her mouth.

The next day they go over ideas for Snowball – Michael wants to target children while Don wants “snowball’s chance in hell.”  Michael tells Don it is impressive he can stop writing for so long and still come up with something.

Betty goes to her weight watcher meeting, she has lost half a pound and she is pleased with herself.  Meanwhile Megan is practicing her lines with another actress.  The actress lets Megan know that she has to act for a living it is not a hobby.

Roger goes to see  Michael about his  Manischewitz problem.  Michael is not comfortable keeping a secret from Don.  Roger tells him he does not like Pete and wants him to stay away from the account.  Michael asks what is in it for him?

Roger calls his ex-wife Jane and asks her to have dinner with him and his Manischewitz client.  She is Jewish and that is why Roger wants her to go.  She tells Roger she will go if he buys her an apartment.  Roger agrees!

Sally is just finishing off her family tree project for school.  She asks Betty if Megan and Henry get branches on the tree.  Betty tells her, ‘Of Course.’

Betty looks over the children’s work and finds a love note from Don to Megan.   Betty is upset and tells Sally to included Don’s first wife, Anna.  When Sally asks for more info, Betty tells her to ask Megan.  Betty is clearly not happy that Don is happy and wants to cause trouble.

The creative team looks at Michael and Don’s ideas for Snowball.  They decide to go with Michael and use Don as a backup.  Don conveniently leaves Michael’s pitch in the taxi, and sells his snowball’s chance in hell idea to the company.  Michael was not happy about what happened but when he confronts Don, Don tells him going with two pitches was a bad idea.

When Sally sees Megan she gets upset at her, she thought she was her friend.  Sally wants to know who Anna is and she is not buying Megan’s explanation.

Megan tells Don and Don is furious, Megan stops him from calling Betty and screaming the phone down.  Instead Don explains to Sally that her mother was trying to hurt him and Megan.

At the office, Michael brags to  Peggy about the secret account that Roger has him working on.  Peggy is not pleased.  She later meets Roger in the elevator and tells him off.

Betty tells Sally she is proud of her family tree project.  However, what Betty really wanted to know was whether she asked Megan about Anna.  Sally tells Betty yes and explains she knows everything.  Not quite what Betty was waiting to hear and she is not pleased.

Roger and Jane are having dinner with the people at Manischewitz and realizes that he is winning over the client and so is Jane who the client Bernard seems to have a crush on.   Roger tells Jane to tell him that they are still married.

On the cab ride home Roger asks Jane if he can christen her new apartment.  He lets her know he misses her and they end up falling in bed.  Jane is upset because Roger has ruined another place on her.  She wanted a new place to get rid of the memories.

On the way home Howard tells Pete he intends to spend as much time with his girl before he goes home to his wife.  Pete tells him he can go home to Howard’s wife and sleep with her.

At the Francis residence, they are all talking about what they’re thankful for at dinner. Betty says she is thankful she has everything she wants and even more thankful no one else does.  Leave it to Betty!

What did you think about tonight’s show? I think Roger should have controlled himself and not slept with Jane again.