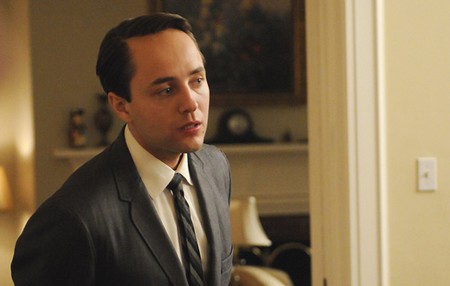 A new episode of AMC’s hit show Mad Men airs tonight on AMC.  Tonight’s episode is called ‘Lady Lazarus.’  Stand by as we cover the episode with all the up-to-the-minute details.

On last week’s episode Sally helped out a relative.  Sally called the police when her grandmother broke her ankle, then she put it on ice to keep her calm.  Abe asked Peggy to move in with him, she wanted a ring but decides to accept his offer anyway.  When her mother finds out she is upset they are living in sin.  Elsewhere, Don, Roger and Pete teamed up to gather new clients.  If you missed the episode you can read our full and detailed recap here.

On tonight’s episode Peggy is irritated by a secret she has to keep. Pete covers for a friend and Don gets unexpected news. . While Pete has to make a phone call, Peggy looks to be dreading one.  I wonder what secret Peggy has to keep.  What do you think?  Hit the comments and let us know!

RECAP: Howard is on a train complaining about having a lean month, then he goes on to say that he has a new tie because he has a new “dish” in the city. Pete asks him if he is worried he is going to get caught.

Don is in the boardroom for a presentation, most everyone likes it. Megan slips to a pay phone to make a call. Back in the boardroom, the clients tells Don that they want someone that sounds like the Beatles and Don says that he will try his best.

Roger has a pair of skis and wants to give them to Pete for doing a good job.

Don meets up with Megan, he wants her to go with her to a client dinner. He asks her when did music become so important, clients are now wanting specific songs.

Don leaves for his dinner, but Megan tells him that she has to work and stay back. Peggy sees Pete leaving with his skis, he tells her it was a present.

Peggy is surprised to see Megan leave, she lies and tells her that Don called and she has to meet him for dinner.

Don calls the office, Peggy picks up and tells him that Megan left a while ago to meet him at a restaurant to which Don is really surprised. Pete drops off Beth, who tells him that Howard doesn’t care if she is alive or dead. Pete feels guilty, he gets out of the car and goes into the house, he tells Beth he is not leaving while she is hysterical. All of sudden, the two are kissing and Beth asks him if he is worried Howard might come home. Pete doesn’t care about anyone at the moment, he is going to make out with Beth.

Peggy gets a phone call, it is Don and she picks up and pretends he got the wrong number. The phone rings again, Peggy leaves the office.

At Beth and Howard’s house, Pete and Beth are naked on the floor and Pete  can’t believe it happened and Beth tells him that “this” can’t happen again. Pete gets dressed and Beth lights a smoke, he tells her that he doesn’t want to leave her.

Pete gets in the car and leaves. Meanwhile, Megan arrives at home, Don asks her where she was and she tells him that she just went out for drinks with friends.

The next morning, Megan heads right to the washroom and Peggy follows her and tells her not to put her in this position. Megan claims she went for a call back for a Broadway show. Peggy tells her to just tell Don she still want to be an actress because she is so talented. Megan doesn’t know what she wants to do, maybe quit and Peggy is upset that she would throw away a job that most people would kill to get. Peggy has had enough, she leaves the washroom and  tells Megan that she doesn’t care what she does.

Don, Peggy and Megan are in a meeting regarding non-dairy whipped topping, Cool Whip and they come up with the slogan, “Just Taste It.”

Pete calls Beth, he wants her to take a train and meet him in the city.  Beth tells him to stop and enjoy the memory, don’t call her again.

It’s late at night, Megan wakes up Don and tells him that she has to talk to him. She tells him that she lied to him last night, she told him that she went for a drink but she didn’t, she had a call back for a play. She feels really bad that she lied to him, Don asks if she got the part and she tells him no. Megan goes on to say that she misses acting, Don tells her that sometimes we don’t get to choose what we want to do. Megan says that she feels better failing at an audition than excelling at the company. Don wants her to stay in the business and she doesn’t want to, she tells him that she has wanted to be an actress ever since she was a little girl. Don tells Megan to go into work tomorrow and say goodbye to everyone, then go on her way – they kiss and go back to bed, although Don has a hard time falling asleep.

The next morning, Don goes into Joan’s office and tells her that Megan is quitting and he wants to know what is protocol, Joan assures him that she will take care of everything.

Megan starts crying, she tells Peggy and the guys that she is not going to be working there anymore because she is going back to acting.

Pete is late for work, but he still finds out that Megan quit but doesn’t care.

Megan is leaving the office, Don tells her that he will bring her stuff home so she doesn’t have to return to the office. Don is surprised when the elevator doors open up and there is no elevator, he goes into his office and pours himself a drink. Rick found a song and they have to present tomorrow in the test kitchen.

Pete is back on the train, Howard invites him to dinner because Beth is a great cook and Pete is thrilled.

Joan tells Peggy that Megan is going to be a failing actress with a rich husband and Peggy disagrees.

Meanwhile, Howard arrives home with Pete, Beth is surprised. The moment Howard is out of the room, Pete lands a big kiss on Beth and slips her a note to meet him.  Beth asks Howard if she can speak to him in private then she tells him that she has a migrane and wants to skip dinner.

Don arrives home and Megan is cooking dinner but she tells him not to get used to it.  Megan then tells him that she was sure he would come home drunk.

The next day, Don, Peggy and Ken are at the test kitchen, the client is surprised that Don did not bring his wife. Peggy and Don present and Peggy mixes it all up, she keeps telling him to “just try it” instead of “just taste it”, which is the slogan. After the client leaves, Peggy and Don get into a fight, she tells him to shut up and when he tries to light a cigarette, the lady in the test kitchen tells him he is not allowed to light up.

Pete is waiting at a hotel for Beth with champagne on ice and she doesn’t show up.

Don is back at the office, Roger comes in and he tells him that Megan is following his dream. Roger tells Don to go home and tell Megan that there is a routine, when Don gets there, Megan is ready to leave to go to acting classes but hands him an album to listen to before she runs out the door.

Don puts the album on and listens to it while he enjoys a drink. Peggy enjoys a joint at the office, while Pete sees Howard and Beth get into a car – Beth draws a heart on the window for Pete. Megan is at acting class, while the music drives Don crazy and he turns it off.