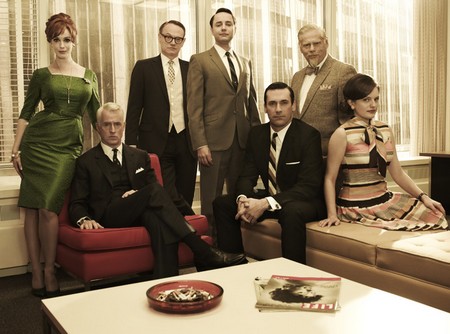 A new episode of AMC’s hit show Mad Men airs tonight on AMC.  Tonight’s episode is called ‘Far Away Places.’  Stand by as we cover the episode with all the up-to-the-minute details.

On last week’s episode Lane made some friends — and an interesting friendship ensued. Meanwhile, Pete got the spotlight as he entertained guests. Pete felt sorry for himself last week and ended up getting totally drunk and having a bloody fight with Lane Pryce.  After everything happened Pete felt defeated and distraught and claimed that despite his great job, a beautiful wife and baby at home — he has nothing.   He ran to Don and started crying.

Meanwhile Lane kissed Joan when she comforts him after fighting with Pete, then apologizes. She says that everyone has wanted to do that to Pete Campbell.  Despite Don not being the main focus of last week’s episode – he did have one of the best lines.  He said, “Saturday night in the suburbs, that’s when you really want blow your brains out.”   If you missed the episode you can read our full and detailed recap here.

On tonight’s episode Don, Roger and Pete team up to get some new clients; Sally lends a hand to a relative.  Peggy is rattled by a particularly difficult pitch. Don visits a potential client.

RECAP: Peggy has been working on  Heinz, for months, her boyfriend wants to go to the movies and she can’t promise him that her mind will be on it. He storms out and tells her that he is her boyfriend and not a focus group, then he wishes her a shitty day.

Peggy arrives at the office, seems like everyone else is having a bad day as well. Don walks in and tells Peggy that he and Megan will have to miss the presentation, she tells Peggy to break a leg. Once they leave, Peggy takes a smoke.

It’s time for the presentation, Peggy tries her best but Raymond doesn’t seem to like it. Raymond wants to know if Don signed off on this. Peggy tells Raymond that he actually does like it, he is disagreeing only because he likes to argue; she puts him in his place. Raymond tells her that she is lucky that he has a daughter, or he wouldn’t be so understanding. Ken explains that they are frustrated, but they are not through. Ken invites Raymond to dinner, to take his mind off of things, then they leave the room. Paul tells Peggy that he admires him, that was a completely suicidal move, woman usually want to please.

Later, Ken goes in to see Peggy and tells her that she is off the business. Peggy leaves the office, she heads to the movies, alone. Peggy meets her boyfriend there and shares a smoke with him, then he tries to make a move on her. She tunrs to hit on him, unzips his pants (the rest I’ll leave to your imagination).

Peggy heads back to the office, she finds Michael and after a brief exchange where she sees him with his father, she heads into the office and falls asleep on the couch. Peggy is awakened by a phone call from Don, she tells him that it didn’t go well and she takes full responsibility, he says he’s got to go and hangs up her.

Peggy is with Michael, he tells her that he is a full blooded Martian, but she doesn’t have to worry because they are not going to take over work. Michael tells her that his father told him that he was born in a concentration camp, but that is impossible. He also told him that his mother died there. Next thing he knows, Michael is in a Swedish orphanage, he was five and remembers it. Peggy asks if there are others like him and says he doesn’t know because he hasn’t been able to find any.

Peggy calls her boyfriend, she tells him about Michael being born in a concentration camp and doesn’t believe that it could be possible.

At the office, Roger tells his secretary that he is going into his office and wants to be buzzed when Don arrives. Roger gets a buzz, Don opens the door. Roger tells Don that Bob has moved over to Howard Johnson to help them with the new model, it’s going to be in Plattsburgh, New York. Roger tells Don that this is where is is happening and they should both go there, Don says they’ll go and he’ll bring Megan and Roger can bring Jane, Megan gets along with everyone.

Don tells his secretary to get him out of everything for the weekend.

Roger is heading out to dinner with Jane to be with her snooty friends, he was really wishing he could get out of it. At dinner, Roger is clearly bored and wants to leave the dinner early. Jane tells him no, she wants to take LSD with her friends, Roger gives in. Another couple decides to go and opt our of the LSD. Roger puts it in his mouth then says to Jane, “you say I never take you anywhere”. Roger gets up to pour himself a drink and declares the product is bring, he takes the cap off the bottle and it starts singing, he puts the cap back on. Roger tries to ignore everyone, he is looking at a magazine and sees a guy that has grey and have brown hair, split down the middle and when he looks in the mirror, he looks like that guy. Roger turns around and he sees himself dancing with Jane, she is crying. She tells him that it is perfect there, then Roger says, “let’s go home”. At home, Roger is in the bath with Jane when he starts laughing, Jane thinks he is laughing at her but he is laughing at the World Series, he can see the game.

After the bath, the two are laying on the floor in their robes and he tells her that he loves her, she says he always says that and sometimes she thinks her doctor knows her more than he does.

Roger asks Jane if she ever cheated on him and she says no, although once she was tempted. She then tells Roger that he doesn’t like her, he says he did, he really did and the two snuggle together on the floor. The next morning, Roger tells Jane that she is beautiful and they both agree that last night was really beautiful. He tells her that he is checking into a hotel, they are leaving each other. Jane is shocked, Roger says that she confessed last night that she knew it was over. Janes tells him that it is going to be very expensive, he says he knows then tries to kiss her.

At the office, Don tries to convince Megan to go away for the weekend, she is reluctant because of Heinz,, but agrees anyway. They are in the car, Megan tries to fall asleep and Don decides to light a smoke which makes her cough. Megan tells Don that she feels that she abandoned the team and Don tells her that Peggy is in control. They arrive at the hotel and meet a guy named Dale, Megan tells him that she is hungry so they sit down for a bite to eat. Megan wants pie for desert, but Don talks over her and orders orange sherbert with two spoons. Megan is still upset that she left the team, Don asks why she didn’t speak up and she says she tried. The sherbert arrives and Megan doesn’t like it. Megan loses it and starts to shovel it in to make him happy. Megan tells him that she needs to have a schedule to know when she is working and when she is with her husband. He tells her to just call her mother and speak French like she always does, she tells him to call his mother. They go outside and Don gets in the car, Megan is shocked, he leaves without her.

Don doesn’t get far and his conscience bothers him, so he returns but only to not find her gone and the waitress noticed her leaving with two guys. Don is beside himself, it is late and he still can’t find Megan. He tries to call Peggy to see if she heard from Megan, when she says no, this is the reason he hangs up on her. He then calls Marie to find out if Megan called, but she didn’t. A police office wakes Don, he fell asleep in a chair in the restaurant, he tells the police that his wife is missing, it’s been seven hours.

It is the early morning hours and Don is still waiting for Megan. Don starts to think about his future, him and Megan with their two children in the car. All of a sudden, he is alone again and heading home. When Don gets home, the chain lock is on and Megan tells him to go. Don kicks the door open and asks where the hell was she. Megan tells him that she spent six and half hours on a bus and it was all his fault, they both start running after each other and fall to the ground. Megan asks him how could he have possibly done that, left her. Don tells her that it was just a fight. Megan gets up and tells him that she has to go to work, Don hugs her and tells her that he thought he lost her.

Don and Megan arrive at the office, Mr. Cooper dropped off some sketches that he wrote “do over” on. Cooper tells Don  that a client left yesterday because he was not happy, he left a little girl in charge while he was on “love leave”.

Roger walks into the boardroom after Mr. Cooper leaves and tells Don it is going to be a beautiful day.