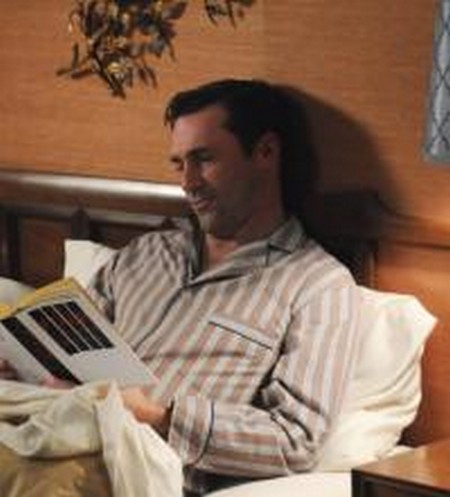 A new episode of AMC’s hit show Mad Men airs tonight on AMC.  Tonight’s episode is called ‘At The Codfish Ball.’  Stand by as we cover the episode with all the up-to-the-minute details.

On last week’s episode Don, Roger and Pete teamed up to get some new clients; Sally lends a hand to a relative.  Peggy was rattled by a particularly difficult pitch. Don visited a potential client.  If you missed the episode you can read our full and detailed recap here.

On tonight’s show Sally helps out a relative on this episode of Mad Men. Elsewhere, Don, Roger and Pete team up to gather new clients.  From the preview it looks like something happens to Sally.  We see Bobby Draper run over to Sally saying “what happened?” Sally seems to be rocking on the floor. It also looks like Don and Megan are happy again.  At least that’s what it looks like in the preview where they are cuddling and kissing.  But then again in another clip Megan does no look pleased and says,“some things never change.”

RECAP: Sally is on the phone with Glenn, he is at his boarding school and she tells him that she is being treated like a slave. Just then, Grandma Pauline comes looking for Sally and trips over the phone cord, she hurts her ankle.

Megan’s parents come for a visit and they start bickering in French which just annoys Megan. They are are in town to attend a Cancer society dinner where Don will receive an award. Megan tries to impress her father, while Don works on her mother by serving them their favorite drinks. Megan gets a phone call, it’s Sally and Don should speak to her.

Roger and Mona share a drink and he shares his LSD trip with her, that he calls a “life altering” experience. He tells her to try it, it’s like euphoria. He then asks her to charm some guys that are honoring Don, she agrees.

After the phone call, Don goes to pick up Sally and Bobby. He proudly tells Megan’s parents about how Sally called the police when her grandmother broke her ankle, then she put it on ice to keep her calm. Megan serves dinner to the children, then her mother makes her excuses and leaves the table for the night. Megan goes to check on her mom and finds her passed out on the bed with a cigarette in her hand that Megan removes. Don and Megan are in bed and he confesses that he thinks her parents are never going to like him.

At the office, Megan tells Don about an idea, it might be really good or terrible, last night when she was feeding the kids spaghetti, she realized that you can take it all the way back to the caveman and forward to the moon, ending with a window on the lunar colony. Don thinks the idea is brilliant, Megan made the suggestion for Heinz beans.

Abe calls Peggy and insists on dinner, she is worried that he is going to break up with her, she confides in Joan who thinks she is being silly, it is a probably a proposal because when a man insists on a meal it is usually because he has something important to say.

At dinner, Peggy is all dolled up and Abe doesn’t propose, he asks Peggy to move in with him because he wants to wake up with her. Peggy is clearly disappointed that it is not a proposal, but accepts anyway and Abe seals it by kissing her hand.

Over dinner with the Heinz couple, Raymond and Alice, Megan goes to the restroom with Alice and she tells her that Raymond didn’t want to fire them in the office, he is going to do it at dinner and hopes that they can still be friends. Megan whispers to Don that they are getting fired, then she coaxes Don to tell the Heinz’s about last night, meaning that he pitch her idea. The idea is a hit and Ken orders champagne.

Peggy is at the office and tells Joan that she and Abe are moving in together, Joan’s first response is that they are “shacking up”, but then she congratulates her and tells her that she wishes her well. Peggy goes on to offer Megan congratulations for getting the Heinz account and tells her that “this is as good as it gets, so savour it”.

Megan’s mom, Megan and Sally return from shopping. Sally asks Don if she can go to the awards dinner, she got a dress. Megan’s parents start fighting and head out of the room, as soon as they are gone, Don tells Sally she can go.

Peggy and Abe have Peggy’s mom over for dinner, Peggy made a ham. Peggy tells her mom that she and Abe are very serious about each other and have decided to live together. Peggy’s mom is upset, she gets up to leave, asks for her cake back because she is not giving them a cake to celebrate they are living in sin.

Roger arrives at Don and Megan’s house, it is almost time to leave for the dinner. Sally walks into the room, in her new dress, boots and makeup. Everyone tells her she is beautiful, Megan’s dad tells Don, “there is nothing you can do, one day your little girl will spread her legs and fly away”, Roger laughs. Don tells Sally to take off the boots and makeup or she can stay home.

Sally is Roger’s date, he wants her to carry all the business cards that he collects. Megan’s dad speaks to Pete and flatters him.

Marie flirts with Roger while Megan and her dad have a chat, he tells her that he doesn’t approve of her career choices and access to wealth that was handed to her. Sally goes for a stroll in the building, she opens a door and sees Marie giving Roger a blow job, they don’t see her and she quickly leaves.

Everyone returns to the table and they are all miserable. Later that night, Sally calls Glenn and she tells him that the city is “dirty”.