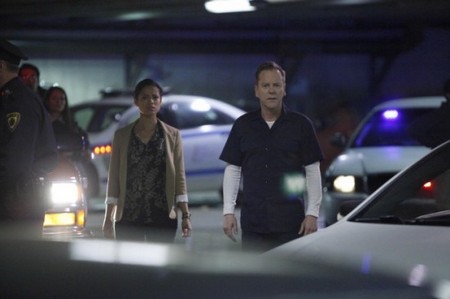 FOX’s new drama starring Kiefer Sutherland, TOUCH returns tonight with a new episode called ‘Lost and Found.’  Stand by as we live blog the episode with all the up-to-the-minute details.  How are you enjoying the show?  I had a bit of trouble following it in the beginning but I really starting to get into it.

On last week’s episode Martin got his laptop stolen on the day Jake was scheduled for an important evaluation. As a result, he becomes ensnared in a young Salvadoran woman’s quest to avenge the death of her family. Meanwhile, Teller tried to reconnect with his estranged daughter.  If you missed the episode you can read our full and detailed recap here.

On tonight’s episode as Martin and Clea work together to uncover a shocking development involving Clea’s mentally-challenged mother, Teller (guest star Danny Glover) steps into trouble when he visits Jake at the board-and-care facility. Meanwhile, a plane crash survivor seeks new purpose to his existence and a Chinese couple struggles to find balance between work and life

RECAP: A Chinese girl gets a call and starts crying, a man is leaving the office, Clea is standing by a train and looks upset, Jake is swinging and Martin is pushing him; it was all a dream and Martin wakes up. Martin is in Jake’s room, he tells him that he had the dream again, then tells him he loves him and leaves.

Clea is a week away from the final evaluation, Sherry tells her that they should keep all their options open, maybe Jake might have to be institutionalized. Clea gets a call, her mother is in a psych ward.

Martin visits Taylor, he gives him a series of numbers and he knows what they are. He tells Martin he had the same numbers years ago, it’s a road map that connects everyone and everything. The doctors told Teller that he had a brain aneurysm, but he knows he is on to something. He has a few more numbers than Jake gave Martin and needs to speak to him but Martin says no because he doesn’t want any trouble.

The Asian girl is at the airport, she meets the guy who left his office, his name is Will Davies.

Martin is working, he drops off a lost bag to someone who has the police at their house because his son is missing.

Clear is with her mom, she was brought in for shop lifting and hasn’t seen her in six years. The good news, they have a bed available, if she’ll consent. Clea tells her mom that when she got the call that she had gotten hit by a car, she was almost relieved and doesn’t want to feel that way. Clea tells her that she is her daughter and CLea’s mom says she is not, runs out of the psych ward.

Teller goes to visit Jake anyway, he lies at the front desk saying the he has a consult to get in. Jake is painting the numbers 9 7 5, Teller says, “I guess you have been expecting me”.

Clea goes to the desk to find out what her mother tried to steal, it was cough medicine, Clea is puzzled because her mother said she had to go home to her child. The TV is on, the news reports about the little boy that is missing, apparently he has a cold so Clea thinks her mother may have taken the child. Martin is with her and they both react.

Will is with Asian girl, still at the airport, he tells her about a building he told his bosses about and now they are going to tear it down. He goes on to ask her if she ever wondered what her purpose was on earth, she says if she asked her parents they would say to procreate. The Asian girl’s baggage is lost, Will gets the standby seat on the plane but gives her his business card before he leaves.

Teller is with Jake, he asks him about when he was very upset a few days ago. He goes on to say that he has been looking for his patient, Amelia, does he know where she is? Jake finishes painting the numbers 9756. Clea calls the police, they she tells Martin that they are looking into her mother disappearing. Martin has the numbers 975 and tells Clea he thinks they are meant to find her mom on their own.

Will wakes up, there has been a plane crash and he is still in his seat on the ground. In his pocket is his ticket, flight 975.

The Asian girl arrives home unexpectedly because she missed her flight and finds a medium in the apartment with her partner, Serena.

Martin and Clea are looking at a map, trying to find Clea’s mom. Clea tells Martin that a homeless person got hit by a car the other day and had her mother

Will is back at his office, he sees the news talking about the plane crash. His boss walks in and asks what he is doing there, but Will tells him he wouldn’t believe if he told them.

The medium tells The Asian girl that the reason her friend can’t get pregnant because of bad spirits.

Teller is looking for Amelia, he goes to room number 6, the last number that Jake gave him. Sherry finds Teller just before he thinks he has found Amelia.

Martin and Clea are in front of the building where the homeless woman was hit the week before. Clea tells her that this is where she would stand and wait for her mother when she was little. All of a sudden, Clea finds a star engraved into the ground.

Sherry tells Teller that he is still chasing ghosts, he aks her what did they promise her, money? He knows she is a part of this, hiding Amelia.

The medium is still at the Asian girls apartment, he is telling Serena that her partner doesn’t want a baby, only her career and that is why they can’t conceive.

Clea tells Martin that her mother drew the star when she was younger, she thinks she is not that far behind.

Teller is going home, he turns on his car to see the numbers 9756.

Will approaches his boss and asks him if he thinks what they do is wrong. His boss tells him that destroying the building will bring in 14 million dollars of profit, so it’s not wrong. Will tells him they should be turning the building into a museum and it matters, he’s not going to let them tear it down. His boss tells him to slow down, he has his whole career ahead of him. Will says he doesn’t have his whole career, nobody does, he has to do something and it has to be today.

Martin and Clea think they have found her mother, in a building that is going to be demolished, the same building that Will wants to save.

Clea and Martin beg the workers to let them in because they think there is a woman and a child in it, but the guys are ignoring them until Will comes in a causes a commotion.

The Asian girl is with her partner, she tells her that it is not because she doesn’t want kids, it’s because her career is important to her. Her partner says she doesn’t know how much longer she can wait, just then the Asian girl gets a call then goes to turn on the news.  They both see the plane crash, the plane she was supposed to be on.

Clea and Martin are in the building, they take the stairs quickly trying to find them. They arrive on one of the floors and find Clea’s mother, Clea tells her to give up Andy, meanwhile Will keeps distracting the workers outside. Clea tells her mom that she is her daughter and used to live there, she tries to jog her memory by telling her stories about things they did when she was younger. Clea’s mother finally remembers her and gives her a hug, Clea asks about the boy, she tells Clea that she lost him, he was wondering around alone and she thought he would come back but he didn’t. Martin gets directions to where the park is and runs, Will is getting beaten up outside just when Clea comes out of the building with her mom. Clea thanks Will for saving her mom’s life, just when a worker notices that Will is bleeding, they call 911. Will drops the plane ticket, Clea picks it up and sees that it is flight 965, just then one of the worker says that Will is dead.

Martin runs to the park, he shouts out the boys name. All of a sudden he hears someone on the swing, it is moving, but nobody is there. Martin hears a small cough, he walks into the forest and finds the boy and asks him if he wants to go home. Marting picks up Andy and hugs him, but in his mind, Andy is hugging Jake.

The Asian girl tells her partner that they have to get pregnant, she now knows that family is more important than career. They go to look at the donors and her partner shows her a photo of one that she likes, it’s Will, he is a donor.

Martin is at the hospital with Clea, her mother agreed to be checked into the hospital. Clea tells Martin that he was right, the numbers all meant something and she thanks him. Martin tells Clea that last night he had a dream, the same one for nine years, Jake is on a swing and going higher and higher. Jake jumps off the swing and hugs Martin, he feels his breath on his neck and he just wakes up. Clea tells Martin that he is a good father and it’s about time someone told him that.

Clea and Martin go into see Jake, Jake is holding on to a book and doesn’t want to give it up. He gets in bed, but is reluctant, Marin sees that Jake has added a “6” to the sequence of numbers and doesn’t know what it means. All of a sudden people are shouting and Teller is in his car, either passed out or dead.

Wow, that was a great episode tonight. What do you think, is Teller dead or just passed out? Don’t forget to come back next week when we will be live blogging the show again.