Madonna Banned From ABC for Sexuality and Nudity 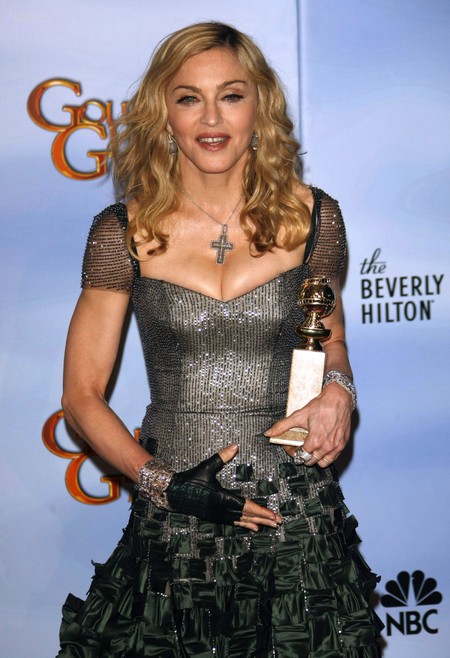 Madonna is a mother of 4, well 5 really, if you count her toyboy Brahim Zaibat, but she still insists on acting like a whore.  Her latest example of insinuating her inappropriate sexuality everywhere has caused her perfume commercial to be deemed too racy for TV.  The ‘Girls Gone Wild’ singer’s new 30-second black-and-white ad for her Truth or Dare scent have been judged inappropriate for Disney-owned channel ABC.  Execs there have ordered that shots of her breasts and butt be digitally altered to cover them up.

A source the New York Post’s Page Six:  “ABC viewed the ad [and] came back with a list of changes. They say they want her bra digitally made bigger, and to extend higher to cover more of her chest, and her corset longer to cover more of her bottom. ABC also wants to cut another suggestive scene where Madonna writhes around.”

However, even once the changes have been made, channel bosses have ruled the ad – which features Madonna, 53, in a corset and fishnet stockings dancing and singing “I’m a bad girl” – can only run after 9 pm, with the exception of daytime show ‘The View’.  What?  Is ‘The View’ special?

A second source confirmed:  “ABC has requested some changes be made to the content of the Truth or Dare perfume commercial.”

Madonna has previously said of the perfume:  “I have always been obsessed by fragrance and for years wanted to create something personal that was an expression of me, but that other people could relate to as well. Something classical and timeless and yet modern.”

Do you love Madonna?  Well then it is time to wise up.  The celeb has always overplayed the sexual card in order to mask a serious lack of talent.  Madonna, just pack up your perfume, your tired music, and your toyboy, and get out of Dodge.