Madonna Gets A Half Hearted Apology 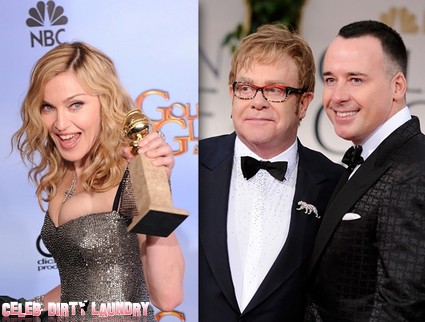 That bizarre feud between Madonna, David Furnish and Elton John over her Golden Globe win appears to be over. Elton’s loudmouth hubby has offered up a half hearted apology to the Material Girl on Facebook.

‘Wow! What a tempest in a teapot. My comments regarding The Golden Globes have been blown way out of proportion. My passion for our film Gnomeo & Juliet and belief in Elton’s song really got my emotional juices going. But I must say for the record that I do believe Madonna is a great artist, and that Elton and I wish her all the best for next week’s premiere of the film W.E.’

Sincere? I don’t think so. I reckon Elton’s had a word in his ear and told him to smooth it over.

Celeb Dirty Laundry has been following this embarrassing dummy spit from the Rocket Man’s handbag since the Globes were handed out on Sunday night. It all started when Furnish tweeted “Madonna. Best song???? F**k off!!!” Then the insults came flying thick and fast…there was even a reference to Madonna and her wannabe successor Lady Gaga.

Madonna is yet to respond to the apology but we know she’s seen it. Her Manager Guy Oseary retweeted a link to the apology after it appeared on Facebook. The singer/actress/director/producer won’t be losing any sleep over the events of the last week. She’s got a few things on her plate to keep her busy. There’s promoting W.E., a Superbowl appearance, new single and new album.