Madonna’s 24 Year Old Boyfriend Asks Her To Marry Him 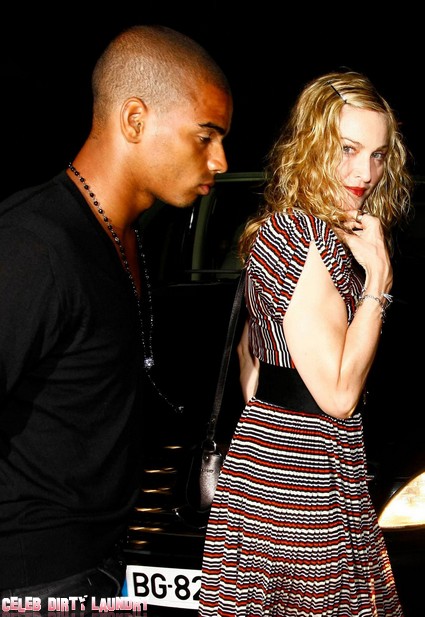 Will it be third time lucky for Madonna when it comes to marriage? Her 24 year old boyfriend Brahim Zaibat has popped the question to the Material Girl. But Madge is not sure whether another trip up the aisle is a good idea.

The 53 year old mother of four has been seeing the dancer for over a year and all was going well until he asked for her hand in marriage last month. According to the Daily Mail the proposal at the Kabbalah Centre in New York took the superstar by surprise and she asked for some time to think about it. Brahim obviously missed the interview where she famously declared she’d rather be run over by a train than get married again.

Marriage would certainly cap off a massive 2012 for Madonna. She has a new album and World tour coming up. She’s also keen to stay one step ahead of arch rival Lady Gaga. Despite putting on a friendly face in public the two singers are extremely competitive Madonna Implies Lady Gaga Ripped Her Off

Despite hooking up with half of Hollywood and plenty of toyboys along the way – Madonna has always taken marriage very seriously. She’s no Elizabeth Taylor having only said I Do twice – in 1985 to actor Sean Penn and director Guy Ritchie in 2000. So she’s unsure whether a guy 29 years her junior is a good prospect. There is one major point in Brahim’s favour says a source ‘Madonna has a real fear of being on her own. It’s a major issue for her, and she loves having a man in her life who is young and makes her feel young.’