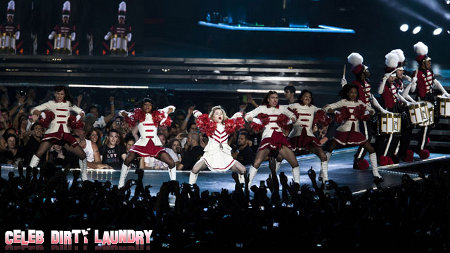 Madonna is facing some criticism from French far-right politician Marine Le Pen.  The 53-year-old controversial singer and performer was in Tel-Aviv, Israel performing her concert last Thursday and caused quite a stir.  During her song, ‘Nobody Knows Me’, Madonna broadcasted an on-screen montage featuring religious figures such as Sarah Palin, Pope Benedict XVI, and Chinese President Hu Jintao.

The montage also incorporated religious and political footage, including images of the Occupy movement, protesters from the Westboro Baptist Church, and tributes to victims of suicide who were bullied for being homosexual.

At one point during the clip, Madonna’s face is seen with her eyes covered by a strip of Le Pen’s eyes, with the swastika flashing several times on her forehead — only to be replaced with the facial features of Adolf Hitler.

The French politician was said to be outraged, threatening Madge should she ever bring the performance to France.

“We understand how old singers who need to get people talking about them go to such extremes,” Le Pin told The Daily Mail.

“If she does that in France, we’ll be waiting.”

Did Madonna go to far?  She’s never been one to fly under the radar, always looking to stir the pot in some way – but isn’t it always for the greater good to prove a just point?

Miss Le Pen is nonetheless furious, and getting ready to sue.  Just for reference, Le Pen’s father Jean-Marie famously described the Nazi gas chambers as a “detail of history”.  This disgusts me.

So the question is, will Madonna bring these images to her July 14th Paris concert or won’t she?