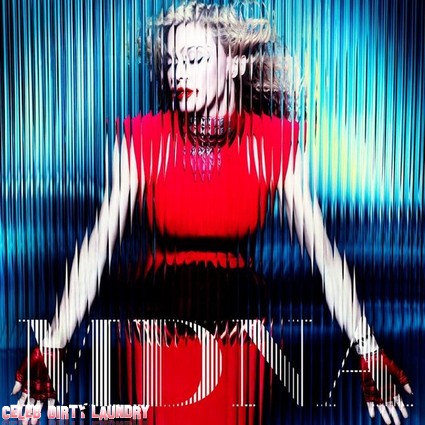 Madonna is always busy. She’s either writing music, recording, promoting, touring, directing, acting, traveling or playing Mom. She doesn’t often take time to stop and smell the roses. That’s why her friends decided to throw her a surprise party to celebrate MDNA debuting in top spot on the US charts.

Madge tweeted about the party during her second online chat with fans last night. The Material Girl then posted a link to a video of her party complete with cake and balloons. You see the superstar walk in looking a bit confused and then her colleagues yell ‘surprise‘. She then finds out MDNA is the number one album in America and turns to her manager Guy Oseary and says ‘I didn’t know‘…she then adds with a smile ‘Does this mean we can take the day off?’ But of course there’s no time to relax – there’s a World tour starting next month!

The Queen of pop then cuts a piece of cake and before you know it her manager is wearing it. It’s a rare candid look at Madonna behind the scenes.We don’t often see her fun, playful side. It’s usually work, work and more work.

MDNA is in top spot in dozens of countries this week including the UK and Australia. It even sold more copies in its first week of release in the US than her previous effort Hard Candy. So the Madonna haters saying a 53 year old can’t compete with Lady Gaga and Rihanna are now eating their words.

Check out the video of her surprise party for yourself…