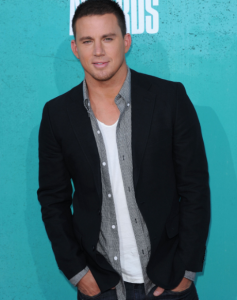 We’ve seen photos, stills, trailers and such but now just a couple weeks before the June 29th premiere. And for you Channing Tatum fans, you are going to love this. Haven’t seen his bare bottom yet? Well, here is your chance at least to tide you over until the movie’s opening date.

Tatum fans, not only do you get to see his chiseled, rock hard body but you now get to see his glorious behind in a one minute clip that debuted on Digitalspy.com. Sixty measley seconds does give you enough male flesh to make your mouth water.

At the beginning of the clip we get to see Tatum posing as an officer as he busts up a party. Well we all know where that leads! After he does a quick mock strip search on a female partygoer, he instead removes his clothing prompting an insanely intense female party.

The film focuses on Tatum (who plays a veteran stripper) who shows newcomer “The Kid” (Alex Pettyfer) the ropes of the stripping game.

From firefighter costumes to cowboys actors Matthew McConaughey, Joe Magianello and Matt Bomer definitely bring the sexy to the big screen. After watching this clip, you may need a splash of cold water in the face.

All I have to say is Jenna Dewan is a very lucky lady.

Check out the Magic Mike NSFW trailer below and then let me know what you think in the comments section. Will you be checking out this flick on the big screen?