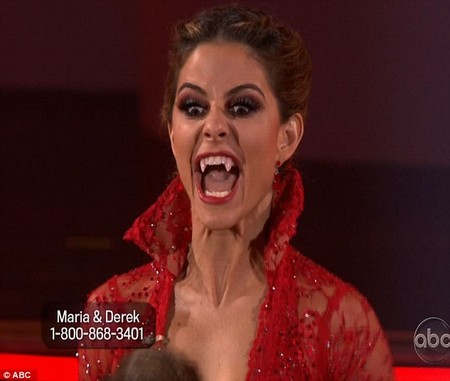 ROUND – 2 Maria Menounos danced the Samba tonight for her trio dance as Dancing With The Stars continued with its eighth episode.  The competition is really heating up as the remaining six couples hit the ballroom tonight with two rounds of competitive dance performances, a ballroom dance and the Trio dance — both of which will be a style that they’ve not yet performed.

We recapped the tonight’s show for you and if you want to see how all the couples did go HERE!  Did you see Maria’s performance last week if you missed it you can see it here!

Maria Menounos and Derek Hough dancing the, Waltz – Derek and Maria did not say anything about their dances this week, they are keeping it under wraps.  But if their dance is anything like last week’s dance where Maria was the star of the night, donning vampire fangs for her paso doble set to Prokofiev’s Montagues and Capulets – we know it will be a great performance.

Judges Comments: Bruno: Maria goes to Bollywood-I have to say creatively this dance was phenomenal. You are like nicely framed beautifully by the two boys. But you lost timing a couple of times. But as a number it was fabulous.  Carrie Ann: I agree with Bruno as the number was fantastic. It was a beautiful way to showcase Maria.  Len:  if I was going Hollywood competition will be at 10 but I was judging a samba and there was no connection to a Samba. I like to find is the dance but I’m judging a Samba.

Watch the video below and let us know what you think? Do you think that Maria did enough to keep him around for another week? Sound out in the comments below!