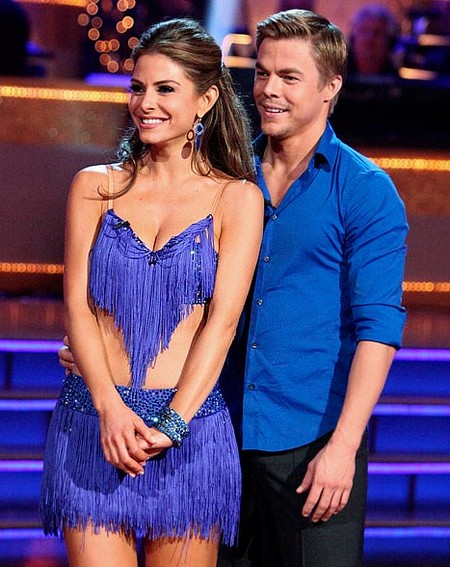 Maria Menounos danced the Viennese Waltz tonight for her first dance as Dancing With The Stars continued with its eighth episode.  The competition is really heating up as the remaining six couples hit the ballroom tonight with two rounds of competitive dance performances, a ballroom dance and the Trio dance — both of which will be a style that they’ve not yet performed.  We recapped the tonight’s show for you and if you want to see how all the couples did go HERE!  Did you see Maria’s performance last week if you missed it you can see it here!

Maria Menounos and Derek Hough dancing the, Waltz – Derek and Maria did not say anything about their dances this week, they are keeping it under wraps.  But if their dance is anything like last week’s dance where Maria was the star of the night, donning vampire fangs for her paso doble set to Prokofiev’s Montagues and Capulets – we know it will be a great performance.

Judges Comments: Bruno: Maria heavenly fluidly seeming transparent transitions. If you combine that with total emotional involvement this is amazing.  Carrie Ann: sometimes stances speak to you sometimes they cling to you. I was hearing angels singing when you dance. Something magical is happening between you. Is to each other that is so special. You guys are unique team.  Len:  Derek this girl that hold is the best. I think you missed a great chance here. Five bars or six bars and hold was not enough for me. You’ve got your standards I’ve got mine. I would like a little more dancing and hold. You disappointed me!

Watch the video below and let us know what you think? Do you think that Maria did enough to keep him around for another week? Sound out in the comments below!