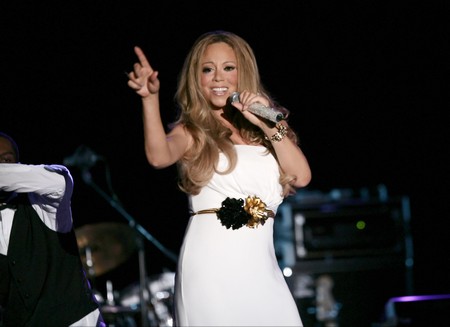 American Idol’s little nervous breakdown might be a thing of the past if the latest rumours are to be believed. It seems that Mariah Carey is super close to putting pen on paper and becoming one of the new judges on Idol. Mariah Carey New Idol Judge is a headline we expect to see everywhere this coming week.  She will be receiving $17 million for her stint on the show.

According to Ace Showbiz citing Deadline, Fox approached the singer because Idol is ready to start the taped auditions. If there are no judges in the cold room of fear, it wouldn’t be funny to see people make fools of themselves with lackluster renditions of “I Believe I Can Fly”.

Fox is also approaching previous American Idol contestants.  Carrie Underwood, Taylor Hicks, Adam Lambert and Clay Aiken have all been rumoured to become judges or mentors on the show, but nothing has been cast in stone yet.

A source says, “Idol is reaching out to try and gauge the interest of former contestants coming back on the show to participate in some way. They wouldn’t necessarily be in judging positions, but the show wants them involved.”

Carey, Lambert, Miley Cyrus, Nicki Minaj and Fergie, have all been touted as the new judges, but Idol is keeping mum about the deliberations, allegations and obligations.

Randy Jackson is the only remaining judge left, but Idol producers have dropped that he “might be moved to a mentoring role on the show”. Thank the good gods of music for that! We couldn’t take his infantile attempts at being funny anymore. He might have been a hot judge in the day, but the universe of reality television has transformed into a hybrid of dramatics and theatrics. Referring to contestants as “dawgs” was mildly amusing back in the third season of the show.

What would Mariah Carey be like as a judge? Will she bring her diva antics to Idol? We cannot wait to see what the future of American Idol holds, and our only hope is that Idol doesn’t fall prey to the verbal gaffes and insecure decisions of X Factor USA.  Maria Carey,  new judge of American Idol – What do you think?