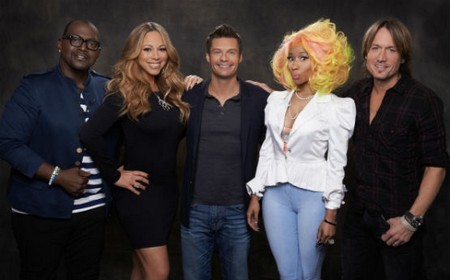 Now this American Idol feud might be getting out of hand. Today on The View, Barbara Walters told the panel she spoke to Mariah Carey about the infamous cat fight she had with fellow American Idol judge, Nicki Minaj, and Mariah told her she was so scared of Nicki’s threats that she actually hired extra security.

“Nicki walked off the set and multiple people heard Nicki say, ‘If I had a gun I would shoot the bitch,'” Walters said. Did Barbara Wah Wah really say bitch?

TMZ also reports: “Walters adds, Mariah said Nicki has not apologized but told her she loves her ….HOWEVER, Nicki said they might be fighting again on American Idol.”

Of course there’s going to be more fighting – AI wants to win the ratings war. It needs something to beat Britney Spears‘ craziness!

Nicki continues to play along and she was none to happy about Mariah making the call to Mama Barbara. Nicki tweeted, “I don’t call tmz n Barbara Walters cuz I stand on my own two feet. Never needed an army. God is good. Insecurity is as cruel as the grave” and continued “I guess it hurts 2 have the producers tell u to ur face that nicki is the best judge we’ve had since simon. Awww, poor u. Keep them lies cmn.”

Ya, there’s definitely going to be more fighting. But I’m sorry. I can’t get behind this fight. It’s not real! American Idol needed this confrontation. I’ve got no doubt Mariah and Nicki aren’t the best of friends but it’s just too timely and too obvious. The show’s producers should have leaked little stories for awhile and then orchestrated a huge blow up down the road. This fight just wreaks of desperation and impatience. The only gun Nicki’s going to be carrying is a plastic one filled with water.

The fact that Mariah ordered more security is hilarious though. Oh Mariah! Such a drama queen!

Do you believe the Mariah Carey/Nicki Minaj fight is legit? If it is, is Mariah overreacting a tad bit?