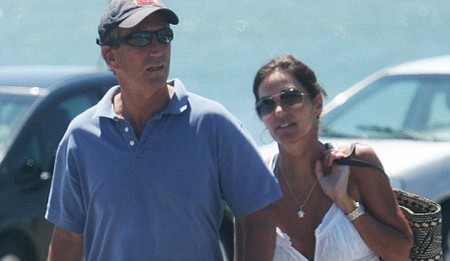 Back in 2009 the South Carolina Governor, Mark Sanford, disappeared for five days.  When he surfaced he claimed to have been hiking on the Appalachian Trail and out of reach for that reason.  It was pretty quickly revealed that the hiking trail led right to his mistress, Maria Belen Chapur.  The shamed Governor admitted he had lied and that mistake cost him his then wife, Jenny Sanford, as well as a political career that many believed would lead him to the White House.  Sanford issued a statement this week to CNN not only confirming that he and Chapur are not only still together, but in fact engaged.

“Yes, we are engaged, and I’m both happy and excited for what that means.  “I have long expressed my feelings for her, she’s a wonderful person. My closest friends have met and love her, and I look forward to introducing her to still many more that have yet to do so.”

Sanford has from the start referred to the Argentine beauty as his soul mate, causing first wife, Jenny Sanford to quickly file for divorce.  It’s a good thing that Sanford is happy in his personal life because not long after his personal fall from grace his political career also fell apart.  Furious South Carolina lawmakers called for Sanford’s impeachment in 2009, after the state ethics commission investigated Sanford’s use of state planes, campaign cash and first-class travel expenses.  He instead received a formal reprimand and was ordered to pay $74,000 in ethics related fines.

Do you think Sanford will manage to stay faithful to Maria Belen Chapur or will it be a case of once a cheater, always a cheater?  Did anyone expect to see Mark Sanford’s mistress become his fiancee?  Tell us your thoughts in the comments below!