Married to Jonas: Jonas Brothers’ Mom is the ‘Mother-In-Law From Hell’ 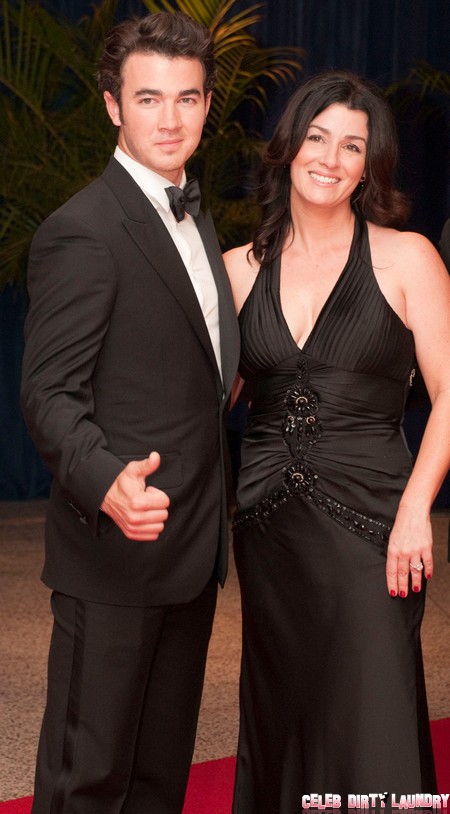 My impression of the Jonas family, before last night, was that they were a very humble family with a rag to riches story. The boys are all sweet when you meet them and appear to be down to earth. I was sure that my impression of the boys was because of how well their parents raised them. Well, after last night, I know for certain that is not the case. Denise Jonas, mom to the famous trio, came across as mean spirited towards Kevin Jonas and Danielle Deleasa , it’s probably dad Joe that had the biggest influence in the boys’ lives.

Last night on E! was an all new episode of Married to Jonas, did you see the episode? If you missed it, you can read the full recap here.

Kevin and Danielle visited the Jonas family at their compound in Texas and were Denise organized an ambush in front of the whole family by Bob, the families’ spiritual adviser. Bob spoke to the couple about how God wants them to have a baby and the lord told him to speak to them about it, the whole speech is awkward to say the least. Kevin didn’t like the fact that he and Danielle were ambushed and decided it was time to confront his mother.

Aside from Denise showing viewers that she is the mother-in-law from hell, there were two other shocking revelations last night. Kevin’s grandfather was diagnosed with liver cancer. Kevin took the time to speak to his grandfather privately and he seemed to be dealing with diagnoses quite well considering. Danielle had some shocking news of her own revealed, she’s anxious and has been battling with her condition for years and is on anti-anxiety medication to alleviate the symptoms. Could having a mother-in-law like Denise only worsen her condition?

Kevin and his mother talk, he tries to tell her that Bob’s ambush was awkward and he feels that it should have been a conversation that Bob had with he and Danielle only. Denise obviously doesn’t like to be confronted, she then comes on the counter attack and tells Kevin that he should not have went to the rodeo the night before with his grandfather being cancer-stricken. Then Denise decides to cut a little deeper and insult Danielle for wanting to use paper napkins instead of cloth. Denise doesn’t even bother apologizing for ambushing the couple about the whole “baby” thing.

Letting go of ones boys is not an easy thing for any mother, but Denise is coming across as a mean spirited control freak.  Her children’s fame and money have obviously gone straight to her head, does she forget when Kevin was around five years old? Her husband failed to make it in the music industry and the family’s carpet business failed so they had to eat off food stamps from the government? Did the government supply her with stamps for cloth napkins? If Kevin had not gone to the rodeo would his grandfather’s cancer diagnoses change? Can God really tell you when it is time to get pregnant? Those were really cheap shots made by Denise, Kevin needs to protect Danielle or she may end up institutionalized with this mother-in-law from hell!