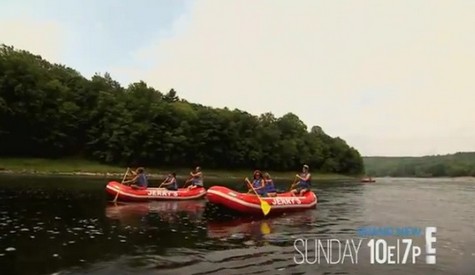 Tonight on E! is an all new episode of Married to Jonas. On tonight’s show called is called “In-Laws & Outdoors.” On tonight’s show Kevin and Dani receive unexpected reactions to news that they share on a family camping trip.

On last week’s show after Dani’s younger sis Katie graduated from high school, Dani decided she wants to be the cool big sister and throw her a huge graduation bash– but her plans got sidetracked when her mom and Dina step in and takeover! Meanwhile, Kevin hired a dog trainer to teach their puppies not to pee everywhere in the house, but Dani was so stressed out with party planning she doesn’t have time to concentrate on the dogs. Plus, Kevin zeros in on his music with the Jonas Brothers– but doesn’t feel like his singing is up to par with Nick and Joe.

On tonight’s show Dani and her family are easing in to Kevin’s rock n’ roll lifestyle, but things are about to get rough. Kevin has wanted to go camping for the longest time.  Kevin even went out and bought the girls a toilet, much to the shock and horror of the ladies.

Kevin has just not realized you should not take an Italian family camping.  At one point Dani’s mother says as they enter the great outdoors, “You got to be kidding me, this is too woodsie!”  It also looks like Dani and Kevin have an announcement to make.  The announcement will receive unexpected reactions to the news they share on the family camping trip.

Tonight is going to be a great episode that you won’t want to miss, so be sure to tune in for our live coverage of E!’s “Married to Jonas” tonight at 10PM EST! Meanwhile, while you wait for our recap hit the comments and let us know what you think of season 1 of “Married to Jonas”, so far!  Check out a sneak peek of tonight’s episode below!

Tonight’s episode: Kevin has a “baby bucket list” and one of the things on it is to go camping. Kevin and Mikey are buying camping supplies with Bucky. Kevin wants to test Dani, if she can handle camping, then she can handle having a child. Bucky is convinced that this is not a good idea to go camping with his wife, Angela, and three other women.

At home, Kevin has a surprise for Dani, everyone heads outside and finds Mikey and Buckey with camping gear. Angela doesn’t understand why the men just couldn’t go on their own. Kevin thought Dani would be impressed with the portable toilet, but she’s anything but excited.

The family is getting ready to go camping and Angela can’t believe that Dina packed a suitcase when they are going only for one night. The family is finally all packed into the SUV and Kevin tries to give the women some advice, if they find animal feces they should rub it on themselves to deter the animals from going near them! That doesn’t go off well.

The family arrives at their destination and Angela cannot believe how rustic it is, Dani is speechless. Little does the family know, but Kevin and Dani have a big announcement to make.

Dani’s mom is so far from outdoorsy, she looks like she is having a panic attack. Bucky warns everyone that it is going to be one tough night while Dina is craving Pina Coladas.

After a raft ride with the family, Kevin announces that they have to catch their own supper. Dani and Dina are having problems with the live worms, but Dina finally starts fishing with Kevin right behind her.

Angela has a plan, after dinner she wants to pretend she is sick and have to go home, she tries to enlist Katie’s help, but she’s not into it.

Dinner is over and Angela puts her plan into action, she announces she is sick and all her kids bail on her and won’t assist her with her plan to get out of the wilderness.

Kevin announces that he and his brothers are going on tour soon and when he asks her family if they will watch the house, Dina tells him that she is not going.

Dina explains that she wants to do something that makes her her own person and not her just following Kevin around. Kevin says that he has a better show when she is there. Dina is upset, she clearly doesn’t like that Kevin is discussing this in front of her family.

The next morning, the women announce that camping was an experience that they never want to have again.

Kevin announces that he and Dani have an announcement, the whole family is going to Florence, Italy in a week and a half. Dina is thrilled, Angela is not impressed because of her horrible fear of flying. Kevin reveals that he has already booked the tickets. Buckey doesn’t think that Angela will get on a plane and she no longer wants to discuss it.