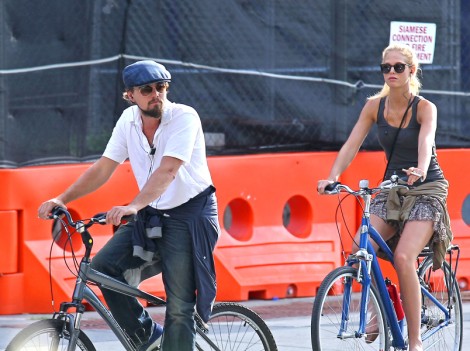 Apparently Leo is spending a lot of time with Matt and his family on the set of their new movie The Wolf Of Wall Street and is realizing that wives and family do not always equal death.

“Watching Matthew and his wife Camila play with their kids inspired Leo. He isn’t getting any younger and is beginning to think he’d like to have a family,” a source reportedly told Star magazine. “Leo’s mother Irmelin met Erin in January and there was an instant connection. Between Matthew talking about fatherhood and his mother pushing for grandchildren, Leo is almost ready to take the plunge.”

On the one hand I think this story is full of sh-t because Leo already spends plenty of time with best friend Tobey MaGuire and his little chickens so if Leo was going to get influenced by anyone it would be Tobey. On the other hand, this story resonates with me because when you don’t have kids, cool people with kids are few and far between. Whenever my husband and I meet kick ass couples with little ones who’ve managed to keep interests outside of their children we look at each other and say “See! It can happen!” But then there are the Gwyneth Paltrows who ruin it and scare us all over again. I know it’s a losing battle so spare me your diatribes!

But I honestly think if anyone’s got Leonardo DiCaprio to settle down it’s Blake Lively. She keeps messing with his head! I’m telling you. I heard he took that break-up hard! And she wasted no time at all going after what she wanted because she knew Leo wasn’t the guy who was going to give her the white picket fence. Is Leo afraid Erin will go the way of Blake? Is he nervous that women have finally caught on to his game and if he doesn’t give a little then Erin will leave?