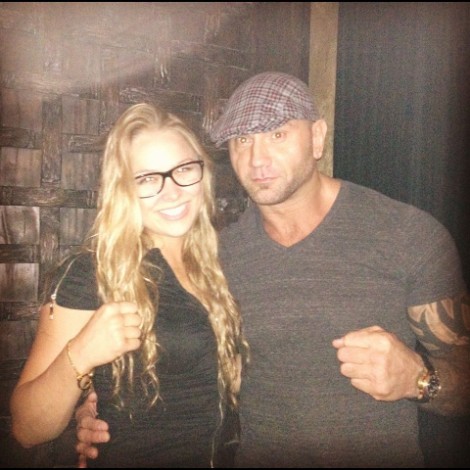 Women are invading the UFC! Olympic medalist Ronda Rousey is making mixed martial arts history and joining the boys’ club over at the UFC. The 25-year-old automatically comes in as the 135 lb champion and will defend her title in 2013.

Rousey has been competing in the Strikeforce league but that’s shutting down at the end of the year. Many are scratching their heads at these turn of events since TMZ reported that UFC president, Dana White, said girls would never fight in UFC. Those comments were made about a year ago. I wonder what could have changed – profitability probably although I don’t know how much money can be made from watching two girls beat the crap out of each other. I have a hard time with it and I’m all for equal rights for women in MMA. It’s totally cool if they do it. I just don’t want to watch them do it.

But the UFC couldn’t have picked a better Sally Ride. Obviously Rousey’s hot and, as evidenced by the pics below, has a fun personality which helps as a trailblazer. And she’s a mouthy little spitfire! She apparently had this to say about the greatest Olympian of all time – Michael Phelps: “Get over yourself, all you do is swim.” Nice.

And there’s no love lost between Rousey and Kim Kardashian. She told ESPN: “You know what? I would beat the crap out of Kim Kardashian actually. Any girl who is famous and idolized because she made a sex video with some guy and that’s all you’re known for, ‘Oh, I got my fame for sucking [expletive],’ I think it’s pretty stupid, sorry, but it’s true. Why is everyone slipping it under the carpet now? She’s selling Sketchers to 13-year-olds. I don’t want some girl—whose entire fame is based on a sex video—selling Sketchers to my little sister. Girls like Kim Kardashian are being pushed in my little sister’s face, and it’s just not healthy. She shouldn’t need to have role models like this, and that’s why I’m doing stuff like ESPN Body because someone needs to do it.”

On second thought, maybe I will watch this chick beat the crap out of someone. I watch Keeping up with the Kardashians sometimes and that’s much sadder.

Is the world ready for the first female UFC fighter? Ronda Rousey sounds like she’s going to be fun to watch, don’t you think?