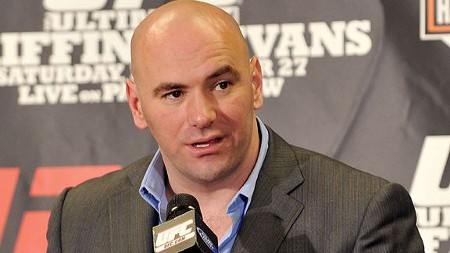 UFC President Dana White says it’s time for UFC to head to the Olympics and have its chance to compete for some shiny gold medallions. However, while he agrees with the fact that the UFC, a mixed martial arts sport, should go to the Olympics, when asked if people with disabilities could enter the UFC he wasn’t too keen on the idea.

Our pals over at TMZ caught up with Dana White as he was leaving Mr. Chow, a restaurant in Beverly Hills with many other locations around the world. White was asked, after witnessing inspiring Olympic athletes such as Oscar Pistorius (South African runner and double amputee competing in the London Olympics 2012), if he ever thought individuals with physical impairments could succeed in the UFC arena.

White claims he’s not one to say something isn’t possible, but he was skeptical about someone with a severe physical impairment competing in the ring. When asked to comment on whether or not he felt XFC fighter Nick Newell, a fighter with only one hand, would have a shot in the sport he was hesitant. “I think it’s hard to fight in the UFC with one arm let alone two arms. BUT there are amazing people out there who accomplish incredible things . . . .” We’re not sure how fans will take that comment, but to hear him say it for yourself you can click here to watch the video of his brief street interview.

White definitely feels as if UFC needs to go to the Olympics. He points out that Judo, Karate, Wrestling, and Boxing are all sports sanctioned by the Olympics. “UFC is a mixed martial art. It just combines all those things.” Whether or not UFC will get its shot at Olympic gold in the future years is still cloudy, but we want to know this: would you like to see UFC as an Olympic event?