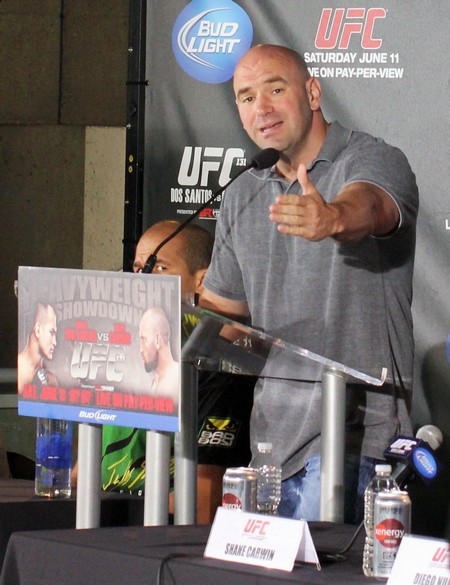 MMA fighter Dan Quinn has threatened to kill UFC President Dana White. There is crazy and then there’s Dan Quinn.  I get that MMA fighters have to talk a good game and come off as totally badass.  I also get that they threaten each other all the time and it’s part of the appeal of this kind of fighting entertainment.  This seems to be a bit different though.  UFC Prez Dana White is on the receiving end of some nasty death threats that are leaving insiders a bit uneasy.

No one knows exactly what sparked the special brand of crazy that former fighter, Dan Quinn, has unleashed on White.  Quinn’s fighting career did span nine years although he never took part in an actual UFC matchup.  He did fight a few who later moved up to fight in the UFC though.  Insiders say that Quinn has threatened to “shoot [Dana] right in the head” and inundated him with voicemail messages threatening to blow up White’s offices or put a bullet in the back of his head.

Dan Quinn has taken to YouTube for years now, threatening White on camera for all to see.  Recently he got access to the president’s private work number and madness has ensued.

UFC Prez Dana White is on the receiving end of some terrifying death threats from an ex-MMA fighter who says he plans to “shoot [Dana] right in the head” — and now cops are on the case.

It’s unclear what started the beef, but the wannabe fighter — Dan Quinn — has gone off the hinges, leaving voicemail messages threatening to blow up Dana’s offices and put a bullet in the back of his head.

Quinn’s fighting career spanned nine years from 2001-2010. He never fought in the UFC, but did face off against a couple of future UFC fighters, including 2004 heavyweight champ Frank Mir (Quinn got beat).

Quinn has made rambling threats against White for several years on YouTube, but they escalated recently after Quinn somehow got Dana’s private work number and left chilling messages.

In the voicemails, obtained by TMZ, the delusional Quinn accuses White of sending in henchmen to kill him, claiming, “I just want you to know, since you’re bringing that to me, you should be worried about your own safety, bitch.”

The voicemails get even weirder — one from a guy (presumably Quinn) speaking in an Irish accent and calling himself “Paddy O’Neill.” The “Irish” interloper then makes several threats.

We’re told White has never met or spoken with Quinn — sources say the Prez never ever heard of the dude until last week, when the voicemail threats got crazy.

White’s security team turned the voicemails over to the Vegas PD, which is currently investigating.

Calls to Dan Quinn were not returned.

Watch Quinn in action below and tell us what you think!