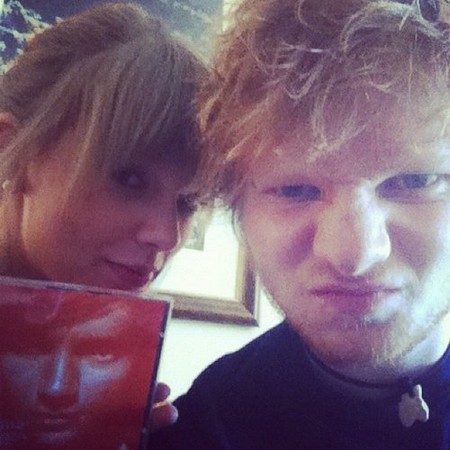 It appears as if serial dater Taylor Swift has found herself a new love interest, and this time Swift will be going on tour with him! So who is the man of Swift’s dreams this time, well it’s a British singer/songwriter/guitarist by the name of Ed Sheeran.

Allegedly, Swift and Sheeran have been friends for a while so it was natural to happen getting romantic now that Taylor is on the prowl again since splitting with Conor Kennedy. The two even collaborated on new song on Swift’s new album entitled Everything Has Changed. But in all honestly, everything hasn’t changed. Swift has a new man in her life, again and it doesn’t seem all that different besides the fact that he doesn’t have an A-list name recognition. Making that’s what Sheeran is hoping for in Swift, getting his name out to the masses to sell more of his music.

I mean, it’s even getting to the point where they are tweeting each other publicly now.

@EdSheeran: Bit late on this I know, but my mate @taylorswift13′s single ‘we are never getting back together’ is out in the UK now! Like….ever.

@TaylorSwift13: Just looked at the nominees- my buddy @edsheeran is nominated for an EMA too!

@TaylorSwift: MISS YOU BUDDY!!! RT “@edsheeran: @taylorswift13 congrats on being a BAWSE”

Does Swift think that going through all the different stereotypes in men will eventually lead her to the right guy? This is a 22 year old woman. I don’t see the need for jumping into a new relationship so quickly. Taylor has dated a handful of guys in the past few years and none of them seems to be like the other. Swift’s tour is going to be coming up in the spring so let’s hope Swift and her new guy can last that long or else it will be a miserable tour for them both since we know how bitter she can get towards ex-boyfriends and all.