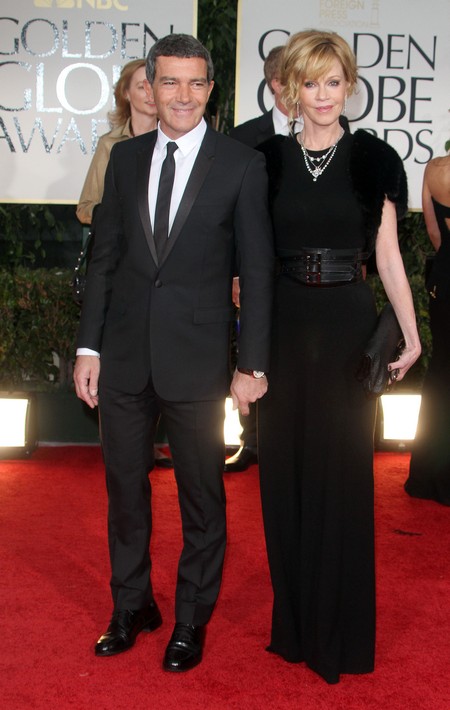 Looks like another longtime celebrity couple is this close to divorcing. Melanie Griffith and Antonio Banderas have hit the skids hard and attempts at repairing the problems don’t seem to be going very well. It has been widely rumored that the problem is Antonio Banderas cheating as usual.  Antonio cheated on Melanie back in April and that is just one of many things that has this marriage in crisis. Radar Online has more from a family source.

“Everyone in the family is distraught over this but the sad fact is they’re really not in a good place,” the source says. “At this point the word is that they’re literally on the brink of divorce “This isn’t a new problem, there have been some big issues for a while. They’ve been in counseling and they’re still going, but overall it seems to be the end of the road.  They love each other very much and always will but they haven’t been the way they used to be for a while now. They used to be the most passionate couple; they couldn’t keep their hands off each other. But they haven’t been intimate in months and rarely even sleep in the same room these days. It’s not good.”

Melanie is rumored to be crushed by the situation.  She expected to be with Antonio forever and viewed their relationship as her own personal fairy tale.  Sources say that Antonio is working over time to try and romance and win his wife affections, but she has played hardball with him, even stepping out without her wedding rings!

“Melanie is absolutely distraught. This was her fairytale and it’s falling apart. They’ve been through rough spots before, so there’s always hope that they’ll get it together and fix this, but right now that is definitely not looking like that is the case. There’s still a lot of love there though, that’s for sure.  It’s not a case of them hating each other but it’s a very hard time for everyone right now. No one really wants to accept that it’s happening, that’s why they’re still keeping it all under wraps.”

So few couples make it in Hollywood and a 15 year marriage like these two have shared is beyond amazing.  Do you think they’ll find a way to work through their issues and stay together?  Let us know your thoughts in the comments below.