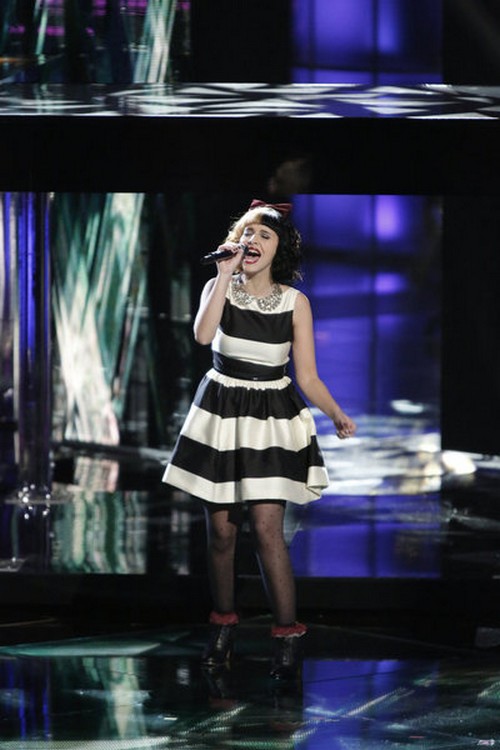 Melanie Martinez took the stage tonight on THE VOICE for his Top 10 video performance.  Melanie sang “Seven Nation Army” by The White Stripes. Tonight’s show the top 10 perform live in front of coaches Christina Aguilera, Adam Levine, CeeLo Green and Blake Shelton for America’s vote and a chance to move on to the elite eight.  Did you miss tonight’s episode?  If you did we watched it and we recapped it here for you.

Judges Comments: Team Adam is putting a lot of faith in 17-year old Melanie Martinez. She’s going to perform Seven Nation Army by the White Stripes and this just might be amazing. And it is. This girl has a vulnerability that just sucks you in and this song is perfect to showcase that. Blake is thrilled to see her playing her guitar and he wishes that he had an opportunity to work with her. Christina sees that she pushed herself further than usual and still needs to find her comfort zone. Cee lo thinks it’s the coolest thing he has seen this year.  To vote for Melanie Martinez: 1-855-VOICE-03