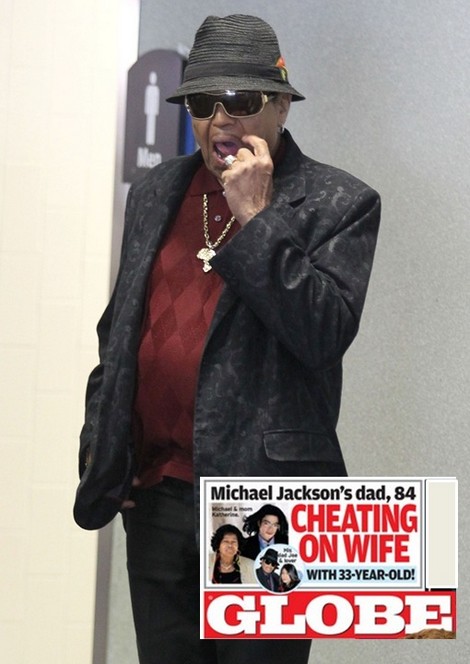 When you want to talk about hound dogs from hell then you better not forget about Joe Jackson.  The Jackson Family patriarch was a player before the term was even coined.  Poor Katherine Jackson has had nothing but misery from the man who pushed Michael Jackson way too hard when he was a child star and has behaved as a greedy lecher ever since.  Just for the record, Michael couldn’t stand his father and nobody could blame him.

Now GLOBE has exclusively broken the story that Joe is whooping it up with a spoiled wealthy Indonesian knockout and Katherine is at her wits end with humiliation!  Coming off the recent Jackson Family public scandal, involving Katherine being held against her will by Michael’s warped and greedy siblings, her very own children (!!), poor Katherine now faces this new travesty.

Joe’s new chica is more than 50 years his junior and goes by the name of Lavinia Iskander.  A source reveals exclusively to GLOBE that “Joe is madly in love with her” and that Michael is probably “turning in his grave.”  It seems that Lavinia was obsessed with Michael and is perversely substituting nasty old Joe for his iconic son!

The details in this GLOBE story found in the September 17th Print Edition totally blew me away.  I never imagined that people could get up to such sordidness, even in Las Vegas.  This story is truly shocking and I am not one who is easily shocked.  All I can say is read it for yourself in your copy of this week’s GLOBE – but make sure you are sitting down when you do!