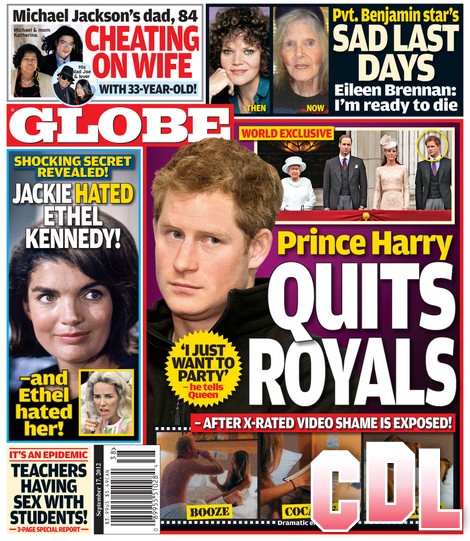 Prince Harry has found his way out of the Royal doghouse following his Las Vegas naked party photo scandal.  But according to this week’s GLOBE Harry’s way out of his opprobrium is not by settling down and attending the 2012 Paralympics and charitable events in his formal role as Prince.  Rather shockingly Harry has decided to get out of the doghouse by removing his royal collar and walking out on Queen Elizabeth!  Prince Harry has resigned as a royal!!

Prince Harry of Wales is now on his way to officially becoming Prince Harry of Partying! The question is how will Queen Elizabeth react to losing her grandson, the third in line for the British throne?  And what about Kate Middleton and Prince William?  Both and Kate and Will dearly love Harry and spend lots of time with him both on official royal business as well as enjoying his company informally.  It will break Kate’s heart if Harry enters the private sector and abandons his birthright.  Can the royal family find it in their royal hearts to forgive Harry just one more time?

We know that Camilla Parker-Bowles can’t be counted upon to support or forgive Harry.  Prince Charles’ wife despises everything and everyone associated with her arch rival, the late Princess Diana.  As GLOBE explained last week, Camilla was the first to get on the phone to blast Harry after his embarrassing nude photos came out. This ongoing royal turmoil will be covered in GLOBE’s typical enthralling detail in the September 17th Print Edition.

The GLOBE also covers the scandal of Michael Jackson’s dad, Joe Jackson cheating on Katherine Jackson with a 33-year-old woman!  Hasn’t poor Katherine been through enough?

Did you know that Jackie  O hated Ethyl Kennedy?  Well according to GLOBE she hated the Kennedy matriarch and what is even worse, we learn that Ethyl hated Jackie right back!  I can’t wait to read about that inter-family feud.  Can you imagine the battles that took place at the Kennedy Compound in Hyannis Port?  We know GLOBE has done their research and will expose all the facts for us.

There are many other hot topics in this week’s GLOBE.  When I read my copy I’ll make sure to mention some of the highlights on Celeb Dirty Laundry later in the week.  For me, the week isn’t complete until I’ve had a chance to sit back and enjoy my GLOBE.  Only then, after I have read GLOBE cover-to-cover, am I satisfied that I am completely up-to-date on today’s hottest news!