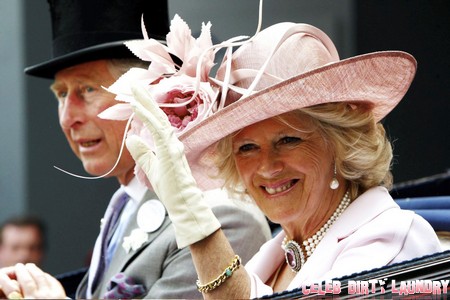 They say it takes one to know one and so it is no surprise that boozy Camilla Parker-Bowles wasted no time in slapping down an already humiliated Prince Harry.  Prince Charles’ wife was right on Harry with a nasty phone call immediately after his ridiculous nude Las Vegas photos wound up on TMZ.  The entire palace was in an uproar as media outlets bombarded official royal representatives with phone calls, visits, and emails.  The press was trying to gauge the damage that the puerile Prince’s naked drunken debauchery had caused and were begging for any official response to the scandal.

Of course the palace is by now used to dealing with Harry’s outrageous drunken screw-ups as it has had to deal with a great variety of other royally disgusting scandals over the years – not nearly all of them involving Harry.   But this particular nightmare – photos of the third in line to the British throne buck naked and up to no good and displayed all over the Internet was a bit much.  People wondered how the octogenarian Queen Elizabeth would survive the ordeal.

In the midst of all this trouble one would expect Camilla, the future Queen Consort, to conduct herself with decorum and behave in a supportive manner.  But no, as soon as the opportunity arose Camilla was quick to be first to add fuel to the fire.  Camilla still feels a deep resentment towards Charles’ sons Prince William and Prince Harry as they are the children of her hated rival, Princess Diana.  Camilla and Charles carried on a long and sordid affair while they were both married to others – Charles to Di and Camilla to Andrew Parker-Bowles. For their part Will and Harry have no great love and affection for the woman that helped destroy their childhood and contributed to their mom’s mental illness.

GLOBE’s sources report in the September 10th Print Edition that Camilla was thoroughly enjoying Harry’s misery: “Anything that deflects from her own boozy life is OK with Camilla,” says one observer.

“She was in her element when she rang up Harry to blast, ‘You’re a disgrace!’”

GLOBE goes on to reveal many details of the heated conversations between Charles, William and poor Harry – and believe me, they are nothing nice!  The only royal who tried to stand up for Harry was Kate Middleton as we reported earlier here at Celeb Dirty Laundry.   Kate always seems to wind up on the opposite side of Camilla on every issue facing the palace.

Let’s see if the fallout from Prince Harry’s Las Vegas scandal dies out quickly or goes on to haunt him and the royal family.  My bet is that the whole thing will be swept under the rug and as soon as Kate gets pregnant it will be as if the pictures of Harry naked never even existed.  ‘What naked pics of Harry – those were blurry anyway – who knows what if anything really happened…’ Ever read ‘Nineteen Eighty-Four?’ Can you speak newspeak?