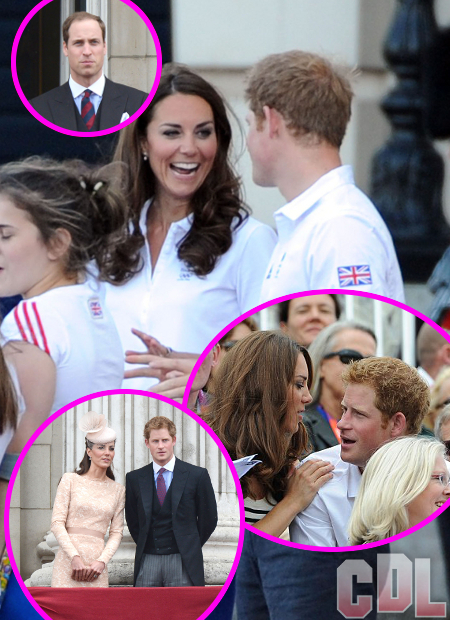 There are reports of the beginnings of some trouble in the royal romance and marriage of Kate Middleton and Prince William.  While we have reported at Celeb Dirty Laundry that the Duke and Duchess of Cambridge appear by all objective measure to be well and truly in love, Prince Harry’s naked photo scandal threatens to undermine their marital bliss.  Although none of the royals are pleased with Harry’s Las Vegas weekend of booze, broads, and possibly drugs, Kate and William have each adopted a different and conflicting approach to the problem.

LOOK Magazine reports that palace sources claim that ‘Duchess Catherine has vowed to support her brother-in-law Prince Harry through his naked photo scandal.’  This might not appear to pose a problem on the surface of things, but Kate’s stance conflicts with Prince William’s. Whereas Kate’s approach is nurturing, her husband’s is more confrontational and judgemental.

An inside source said: ”William called Harry straight away and gave him a bit of a telling off. But Kate pointed out he had already been through the ringer and deserved their sympathy. She’s promised to support him as much as possible and offered to help him come up with a recovery plan to get his public image back on track.”

Of course the differing attitudes of Kate and Will are not terribly hard to understand.  From conservative William’s perspective, his younger brother’s antics are simply unacceptable. Prince William sees Harry’s behavior as terribly irresponsible both for the obvious security risk it imposed, and even more so, for the shame it cast on the Royal Family.  Because Harry is third in line for the throne his shocking display of wanton drunkenness and debauchery fuels calls from those who would terminate the British Monarchy.  William is going to be King of England one day and he doesn’t need his pesky little brother getting drunk and undressed for all the world to see.  ‘Come on Harry,’ says Will, ‘we have palatial estates in Scotland where you can have your drunken orgies PRIVATELY- did you have to get caught in Las Vegas like a red-haired Charlie Sheen?’

Kate on the other hand empathizes with Harry for at least three good reasons.  First of all she really likes Harry – he adds some joviality to the typically staid royal procession.  The two of them are always joking around and harmlessly flirting.

Secondly, Kate is a commoner and has had her cute little nose rubbed in that fact recently by Queen Elizabeth.  The Queen issued the infamous royal curtsy decree insisting that whenever unaccompanied by William, Kate must curtsy to the senior royals.  This nasty little dig was perpetrated by William’s ugly cousins who are dying with jealously over Kate’s beauty and popularity – sort of a Cinderella story here.  Harry’s royal f**k-up definitely makes Kate feel just a bit less ‘common’ and will no doubt shut up those carping senior royals for just a wee bit.

The third reason for Kate’s softer approach to Harry, post the naked photo scandal, is related to the second.  Pippa Middleton was pilloried for her Parisian weekend debacle in which she was photographed in a car with a gun-wielding driver on a drunken joyride through Paris streets.  Furthermore, Pippa attended ‘kinky’ costume parties during her vacation and generally behaved in a raunchy manner.  Naturally this reflected poorly on Kate.  Of course now that Prince Harry has gone and done so much worse, Pippa is off the hook.  Senior royals can’t very well look down publicly on Pippa unless they execute Harry first!

Everyone on the Internet can see Prince Harry’s naked shame – do you think Queen Elizabeth might issue another royal decree – this one forbidding anyone from looking at the Prince’s new clothes?