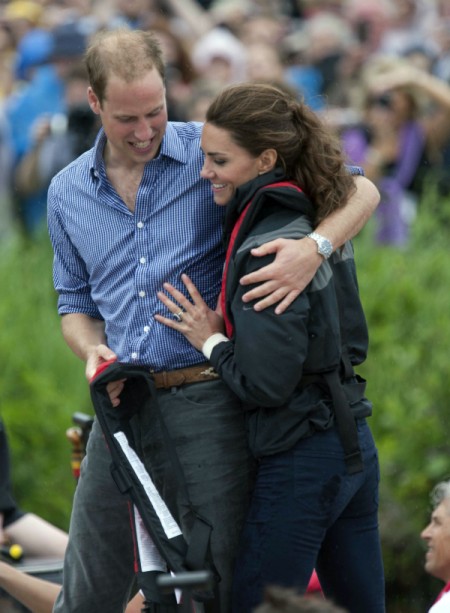 There still may be no baby (although we hear they’re trying to fix that) but Kate Middleton and Prince William appear to be just as in love as they did on their wedding day a year and a half ago. And they’ve got the body language to prove it! The Cambridges were all smiles again as they watched the paralympic games in London yesterday, and although we haven’t seen any hugging or hands on the knees yet, rest assured with Prince Harry’s current mess, we’ll see some soon. But Hollywood Life sources say the scandal, and the hoops it forces Kate and William to jump through, shouldn’t detract from the fact that these two are a true love match.

“William sits in a very open position. Both she and her Prince have genuine smiles as they gaze at each other. Even after a year, it appears the honeymoon is still on,” body language expert Linda Talley told HollywoodLife.com. “They are in sync from their movements to their facial expressions which is a great sign. He absolutely adores her as he looks at her lovingly.”

And with a second honeymoon coming up, Kate Middleton’s baby seems almost certain to follow. The Daily Mail reports Kate and William will get to see a little bit of paradise while they fulfill their upcoming South Pacific tour on behalf of the Queen. Over nine days next month the couple will visit Singapore, Kuala Lumpur, Borneo, the Solomon Islands and tiny South Pacific realm of Tuvalu. Even though the tour will be hectic (Kate has to change 30 times!), William is making sure his wife gets time to enjoy herself. In addition to rain forest canopies, exotic animal watching and crowds filled with pure adulation, the couple will stay at a five-star resort in the Solomon Islands which is considered one of the South Pacific’s “best kept secrets”. DAMN IT! I want Kate’s job!

I know there’s a lot of hand shaking and faux smiling that goes on during these royal tours, but seriously, this sounds awesome. I want to see orangutans in Borneo and swim in crystal blue waters! Sorry… I just had a major tantrum. I had to walk away for a few seconds. Now I’m over it… sort of!

The Cambridges were heralded after their Canadian tour last year so some of the pressure is off Kate now that she’s showed she can go to another country without embarrassing herself (*cough *cough Prince Harry). Speaking of Prince Harry, Kate and William won’t be. The palace has already issued a statement saying any reporters who ask the young couple about Harry’s Las Vegas scandal will be packed up and shipped home. Why not Australia like the English used to? It’s closer!

I can’t wait. The Canadian tour was so much fun. We had fresh Kate and William pics every day! So my gift to you is some nostalgia over that trip. Take a look back at Kate and William’s cutest moments! Is it sad that I can click through these all day? Don’t judge! You just read a post entitled, “Kate Middleton And Prince William Madly In Love” so you can too! Enjoy!

But first, what do you think of the body expert’s diagnosis of William and Kate? Have they got you feeling the Honeymoon isn’t over or do you think William is really good at getting the public to believe what he wants us to believe?