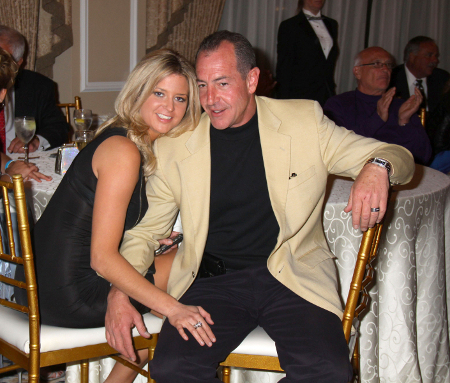 Lindsay Lohan might just be getting a little brother or sister this Christmas because Kate Major continues to be super pregnant with Michael Lohan’s child! Michael Lohan gave Kate Major a major bun in the oven this summer, even though he was in violation of a restraining order which bars him from having any contact with her. (OMG, it’s the Virgin Major, isn’t it?) Kate is in her second trimester, meaning we shall soon see the latest Lohan spawn. Can’t we all just look away now and pretend this isn’t happening?

Michael Lohan doesn’t need another child with another woman! Normally, we would’ve put a bunch of curse words in that statement, but we don’t swear in our normal lives — because swearing is naughty and soap tastes bad. Kate looks extremely pregnant (click for pic), but she, for the most part, looks well. Her mouth is funky though, and for some ironic reason she is wearing white?

Kate “The Virgin” Major is chilling in Florida with Michael Lohan. He escaped legal troubles that arose after he allegedly got up in Kate’s grill, even though he was told to stay farm away from her by a judge. According to news reports, the lovely (vomiting in mouth now) couple don’t know the gender of the little one yet.

Neither Lindsay, Dina, nor Ali has commented on the situation, and we doubt they are going to. Let’s all give a round of applause for the family that tried to be the Kardashians! Oh, please let us know in the comments below what you think of the Kate Major pregnancy!