Michael Phelps Complains About Getting Fat and Being Lazy (Photos) 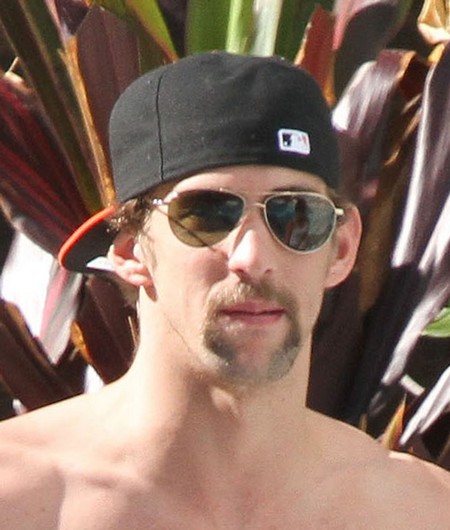 8-time Olympic gold Medalist, Michael Phelps is on his way to his final Olympics in London and so begins the publicity storm around the revered swimmer. Can you believe those games are actually only a few weeks away – three to be exact? Michael Phelps spoke to Details Magazine and let it all hang out.

Phelps covers the August issue of Details Magazine as a way to preview the athletes mindset heading into what he swears will be the end of his swimming career. He talks gaining weight, finding focus and that infamous joint he was photographed smoking a few years back.  Here are some of the highlights from his interview.

Not taking a day off for six years before the 2004 Games: “I used to have a thing—coach Bob [Bowman] and I couldn’t talk to each other before 8 a.m. because I was in a terrible mood. I don’t like getting up that early. Getting into the cold pool just isn’t fun. It sucks. But during those six years it was a sacrifice that I made to try to become my best. So yeah, in bed at 10 or earlier every night. Waking up at 6:30 every day. When I was a kid, I would do anything. Whatever Bob told me to do, I would do about 10 times better. I wanted to be the best. I still do.”

His life post-Beijing, being “fat”: “At that point, I just didn’t have anything. It was weird going from the highest of the high, the biggest point of your life—winning eight gold medals—and then saying, “All right, where do I go from here?” I wasn’t motivated. I did nothing, literally nothing, for a long time. I gained 25 pounds. A friend of mine and I were playing football on the beach in Miami, and somebody got a picture of us and put it all over the place. And he’s like, “Bro, you gotta start working out, man. You are fat.” So I started going through the motions again. I would go back for a week or two and then stop. I’d show up for dry-land practice and then just sneak out the back door so nobody saw me. I was watching Rocky II the other day—the one where he’s fighting Apollo for the second time and he’s just going through the motions. It reminded me of how I was.

Being photographed smoking mary jane: “It was a learning experience. I’m the kind of person who has to go through the learning experiences myself. Somebody could tell me, “If you eat this much you’ll be fat,” and I’d be like, “Yeah, okay, let me try it.” Growing up, my mom taught us to make our own decisions, but also that you have to pay for the consequences of those decisions. I’m thankful for that. I’ll be the first to say I’ve made thousands of mistakes, but I’ve never made the same mistake twice.”

Coming back: “I realized that I probably hadn’t reached my full potential. There was still more in the tank. As I come to closure on my career, am I going to look back in 20 years and say, “What if?” That’s something I don’t want. This is it. I’ve always said I wouldn’t swim past 30. I don’t want to be that guy who’s hanging on, but I want to reach my max potential. I don’t care how much pain I have to go through or the sacrifices I have to make. I’ll get it.”

Being older and it’s harder to recover: “It’s harder to recover. Going into the weight room three times a week, it can be harder to swim, it can be harder to hit all the times I hit back in the day, just because I’m older now. My trainer, Keenan [Robinson], uses Graston tools, these little metal crowbars. He carves them into my shoulder blades, my back, my knee, my hamstrings—wherever I’m really tight—to loosen things up. It’s pretty intense. Obscenities fly out of my mouth the whole time, and I’m usually bruised for two days after it. I also use ice tubs. And when I’m back home, I sleep in an altitude chamber set to about 8,000 feet. All these things help me to be close to my best every time I jump in the water.”

The rumor that he eats 12,000 calories a day: “No. People make a big deal out of what I eat, but it’s not that crazy. I had a three-egg omelet and three pieces of French toast and coffee this morning. For recovery, I think it’s a big deal to eat within a half-hour after you exercise. Otherwise I just try to put carbs into my system before I swim and then load up on the protein after. I don’t count calories. Whether it’s Sour Patch Kids or Reese’s or a bag of chips, if I feel like eating it, I’m going to eat it.”

Swimming after retirement? “I don’t know what I’m going to do, exercise-wise. A lot of my friends are all into Insanity and P90X. I like playing basketball and golfing. I’ll stay involved in the sport through the [Michael Phelps] Foundation. We’ve been able to help almost 3,000 kids be water-safe, to teach them lessons like goal-setting and making the right decisions with healthy, active living. It’s always been a passion of mine to show these kids that if you put your mind to something, you’re gonna be able to get there.”

He has had a hard fight back and the U.S. Swim Team is a tough bunch so this time around, Phelps’ toughest competition might just be his teammates!  Are you a fan of Phelps?  Are you going to be tuning in to watch him compete?  Tell us your thoughts on Michael Phelps in the comments below!

14 time (and counting) Olympic gold medalist Michael Phelps chats with a couple of girls while relaxing poolside in Miami, FL. Michael, rocking a horseshoe mustache, can’t seem to get enough of pools…