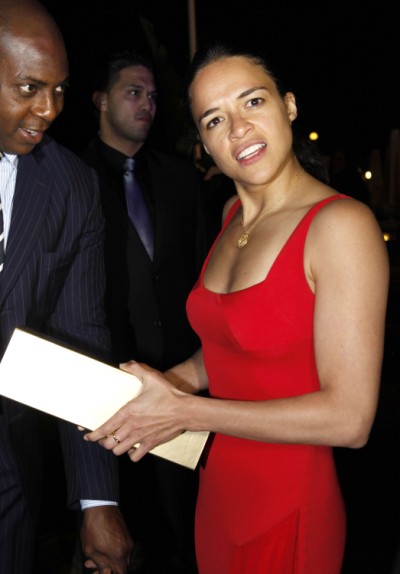 In Where the hell was your PR guy when you gave that interview? news, Michelle Rodriguez came out swinging for Nicole Kidman’s racy performance in The Paperboy, only she declared Nicole won’t get an Oscar nomination because she isn’t black.

Kidman made headlines when it got out that her character takes a whiz on co-star Zac Efron during a pivotal blowfish scene.

Michelle was spellbound. “I f-cking loved it,” Rodriguez told Vulture magazine. “One of my friends said, ‘She’s going to get nominated for an Oscar for that.’ I was like, ‘Nah, man. She’s not black!’ I laugh, but it’s also very sad. It makes me want to cry. But I really believe. You have to be trashy and black to get nominated. You can’t just be trashy.”

“Trashy” nominated roles from Jessica Lange, Mira Sorvino and Elizabeth Shue might discount her Stephen Hawking-caliber theory. So might performances from Angela Basset, Viola Davis and Ruby Dee, but we don’t have to go there. I doubt Michelle even knows who those people are anyway.

Is Michelle still on the island… both figuratively and literally? Is she still racking up DUIs in Hawaii, because WTF? I know everyone needs publicity but geez, not everything that pops into your head is pulled-quote material.

I’m sorry, I had to write out the quote. It’s offensive but it’s one of the funniest lines in any movie EVER!

Has Michelle broken some secret Oscar code? I don’t think so. Underneath the idiotic (and possibly stoned?) words, she’s saying merit alone doesn’t get you a nomination. Fine. If that’s what Michelle needs to tell herself to get over her obviously overlooked role in the Fast and the Furious movies, then whatever.