Zac Efron Lets Nicole Kidman Urinate On Him, Says “I have Been In Love With Her For A Long Time”

BY Jeanne Adams on May 25, 2012 | Comments: one comment
Related : Nicole Kidman, Zac Efron 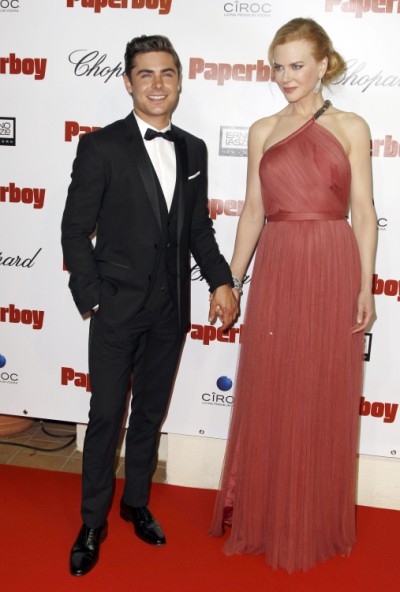 It might not have been sexual, but Nicole Kidman gives co-star, Zac Efron, a golden shower in their new movie, The Paperboy. The two are debuting the movie at Cannes and the audience got quite the surprise when Efron’s character gets stung by a jellyfish in the ocean and Kidman has to relieve herself to relieve him.

Zac was only happy to let Kidman oblige.  Us Weekly reports that at a press conference Efron said he, “had the most lovely time in the world,” making the film with Kidman. “I have been in love with her for a long time, since Moulin Rouge. It was the best opportunity in the world for me, and I loved every moment.”

Zac needs to stop gushing over Nicole. It’s getting kind of embarrassing and reminds me of the condom dropping incident earlier this year. Remember when Zac “accidently” dropped a condom on The Lorax red carpet because he wanted it to impress the 44-year-old Oscar winner in some way. Yes, Kidman was married to Tom Cruise but I don’t think she’s stupid enough to fall for something like that.

Kidman is getting all kinky in this movie and letting her inhibitions and facial muscles relax a little bit more though.

She told reporters she wanted the role as a sex-crazed woman obsessed with marrying a convicted killer so bad she took sexy pictures of herself and sent them to director, Lee Daniels.

“Lee said, ‘Look, we’ve got no money, you’re going to have to do your own hair and make-up,'” Kidman explained. “So I actually went into my bathroom and I got out the fake tan and put on fake eyelashes and got a hairpiece thing that was platinum, threw it all on and texted a photo to Lee in all these different provocative positions. That’s how it came together.”

Said Kidman of his response: “What he sent back I can’t say, but it was a thumbs up.”

Critics aren’t giving the movie a thumbs up at the moment. I keep hearing the word “campy” but I’ll pay money to watch Zac get peed on because I’m gross like that. How about you?