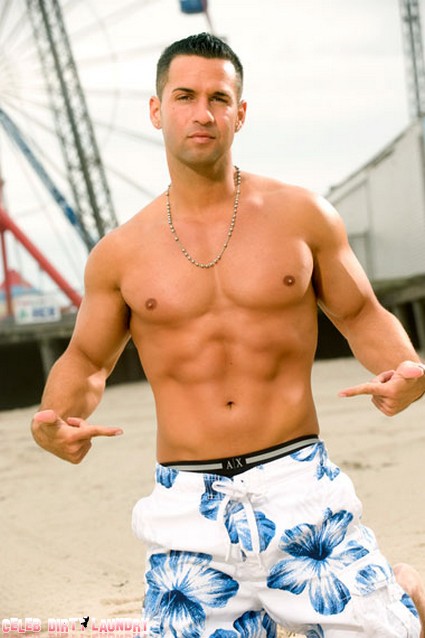 Mike ‘The Situation’ Sorrentino is lucky to still have a gig on The Jersey Shore. It’s been revealed Producers have repeatedly threatened to give him the boot over the last two years thanks to his excessive boozing.

According to TMZ …MTV first voiced their concerns about his love of alcohol back in 2010 during Season two. They sat him down and explained his out of control drinking would not be tolerated . They told him it was disrupting production. Mike promised to be a good boy and pull himself together. But that didn’t last long.

During Season 3 his behaviour went from bad to worse and Producers pulled him aside for another chat – but this time it was a lot more serious. They told him to clean up his act or he’d be replaced. The threat worked initially and Mike seemed to be drying out. He made a real effort during the remainder of that season and into series 4 when the gang went to Italy. But once they returned to the US he went back to his old ways. So yet another recast threat was made.

Last month he finally sought help and checked into rehab.We knew he’d been a handful. Celeb Dirty Laundry covered it here The Situation Acting Paranoid Before Rehab But is sobering up completely what the Producers want? How will that work on the Jersey Shore? There were reports his role would be phased out next season as a result but MTV says they have no plans to replace Sitch at this stage.