BY Nicholas Sanford on March 25, 2012 | Comments: one comment
Related : The Situation 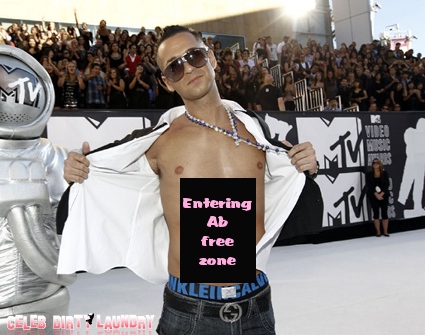 Mike ‘The Situation’ Sorrentino has recently landed himself in rehab, and his situation has gotten a whole lot worse. The Jersey Shore star, who’s allegedly spending time at the Cirque Lodge in Utah for substance/alcohol abuse, is facing a new rule that must have him fuming: NO flashing of ABS.

And just when we thought his story/situation couldn’t get anymore ridiculous, right?

According to our pals over at TMZ, the rehab facility has a strict dress code, one which bans muscle shirts, sleeveless tops, ripped jeans, hats, sunglasses, and any clothing with obscene language — basically, anything and everything that defines the Guido image.

Their rules also explicitly state that there is to be no “abdominal exposure.” Therefore, The Situation will be forced to break his frequent habit of lifting his shirt.

Rumors that the reality TV star would be entering rehab surfaced earlier this month, and just recently The Situation came out with a statement that confirmed the rumor.

One of his statements:

“I have voluntarily taken steps to get control of a prescription medication problem I had due to exhaustion. I have spent the past several weeks getting treatment for this problem and recuperating from my work and appearance schedule. I appreciate my fans support and love you guys.”

What do you think of Mike’s new set of rules? Think he’ll be able to hide those abs from the world for a while? Let’s just say . . . we think he’s going to struggle with the NO ABS POLICY. However, we would like to wish him success and a healthy rehabilitation.