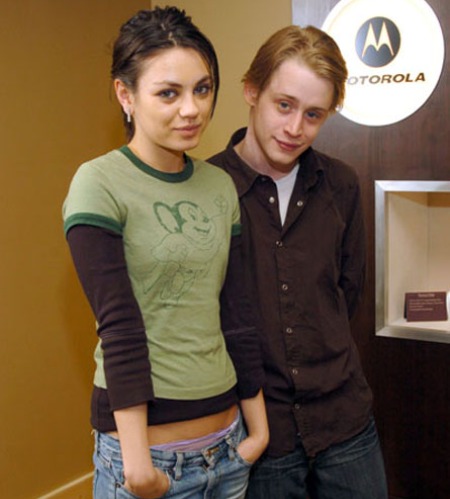 All reports indicate that Macaulay Culkin is addicted to heroin and possibly other narcotics as he heads on a deadly downward spiral.  Sources claim that Macaulay has shot up heroin and almost overdosed a few months ago.  Additionaly, Macaulay was photographed getting sick and vomiting outside the Chateau Marmont hotel on August 3rd.

With this terrifying backdrop we learn that Macaulay’s former girlfriend, Mila Kunis, and her current man, Ashton Kutcher, are desperately trying to get the lost boy into rehab.  According to a friend of Mila’s it was Ashton who convinced her to speak up and take the lead on saving Macaulay.  Nobody wants to see another Whitney Houston type tragedy.  So Mila got on the phone from Bali and did her best.

What is really scary here is that Macaulay pretended he didn’t know what Mila was talking about as she begged and pleaded with him to get immediate help.  Denial is a major problem for many addicts – I mean how can you fix a problem that doesn’t exist?  Macaulay should be grateful that people still care about him and try to listen up before it is too late.

The National Enquirer reports: As The ENQUIRER has reported, eyewitnesses claim Culkin is hope­lessly hooked on heroin. And close pals say Mila – who dated the trou­bled actor for eight years and is now seeing Ashton Kutcher – made a per­sonal plea for Culkin to check into rehab.

“Ashton convinced Mila to call Mac during their getaway in Bali,” a source close to the “Ted” hottie told The ENQUIRER.

“So Mila had an assistant track him down on the phone. When she final­ly heard Mac’s voice, she burst into tears.”

“Then Mila begged Mac to seek treatment at rehab,” the insider continued.

“She desperately tried to make him understand that it was not too late for him to get well.”

BUT Culkin – who played a drug–addled club promoter in the 2003 drama “Party Monster” – ignored her pleas, said another source.

“While Mila was going on about how a long, intensive stint in rehab would help get his career back on track, Mac played dumb,” the second source told The ENQUIRER.

Sadly, it was Culkin’s partying that prompted Mila to dump him in 2010, sources say.

“Mila knew that Mac was a mess after their breakup, but she had no idea his drug use was so severe,” noted the insider. “She’s praying that he gets help before it’s too late.”

The second source added: “Mila couldn’t have imagined how low Mac had really sunk. She thought he was partying and drinking, maybe smok­ing pot – but nothing more. The reports about heroin abuse freaked Mila out.

“Now she has her fingers crossed that Mac will follow her advice and get help. She’s petrified of get­ting the news that Mac has overdosed again or, worse yet, died.”

What do you think?  Is Macaulay really in trouble with drug abuse?  Can all the reports and eyewitness accounts be false?  Usually where there is smoke there is fire – and in Macaulay’s case there is so much smoke that the kid seems to be choking on it.