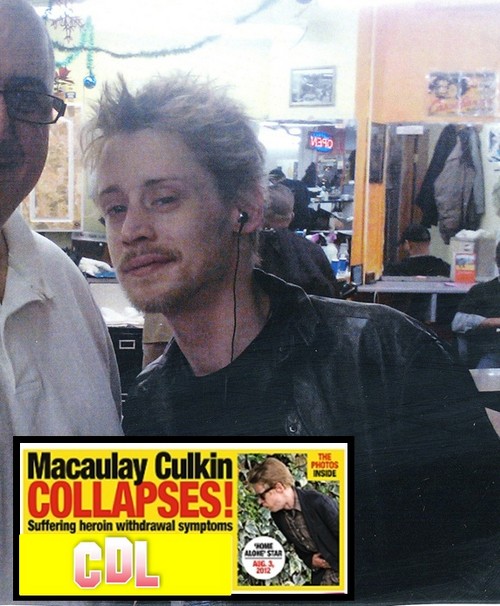 We read with shock and horror that our childhood film idol, Macaulay Culkin, has descended into the nightmare world of hard-core drug addiction.  There isn’t a much worse trip to be on than heroin addiction and that is what The National Enquirer has steadfastly maintained is Macaulay’s current journey. Now it appears that Macaulay might be attempting to dismount the horse but is getting kicked and perhaps even stomped in the process.

As we wrote on August 2nd ‘Macaulay Culkin is in serious drug trouble and his life is at risk. The National Enquirer is standing by the claim that appeared on the cover of this week’s issue (August 13th edition) – they refuse to back down and insist that Macaulay could wind up just like Whitney Houston – dead as a consequence of drug abuse. We don’t doubt that Macaulay is using deadly drugs – all the available evidence points in that direction.’

Now photographic evidence had emerged that shows Macaulay coughing up a lung outside of the Chateau Marmont on August 3.  The National Enquirer went right to the cause of Macaulay’s distress by claiming that it is heroin withdrawal, plain and simple.  On the cover of this week’s edition (August 20th) of The Enquirer they claim ‘Macaulay Culkin Collapses!  Suffering heroin withdrawal symptoms.’

Could Macaulay be withdrawing from heroin and getting dope sick in the process?  Of course he could be!  The Enquirer was blatant in their accusations of Mac’s drug abuse and addiction, even going to the unusual extent of naming their sources.  It turns out that it is the family of Macaulay’s late friend, Elijah Rosello, who insist that she was doing hard drugs with Macaulay before she died.

If Macaulay is not hooked on heroin or one of its prescription analogs like Oxycodone (hillbilly heroin), then why has he not sued The Enquirer or taken a simple drug test to demonstrate his cleanliness?  Furthermore, we speculate that Macaulay’s ex-girlfriend Mila Kunis avoided Natalie Portman’s wedding because she couldn’t bear to see him in such a sad state of dissipation.

The one bright spot here might be that if Macaulay is withdrawing then he might find the will to clean up and live.  We wish him the best of chances.  Life is short and precious – get yourself clean Macaulay Culkin.  Heroin has killed much tougher people than you.

A look at Macaulay over time