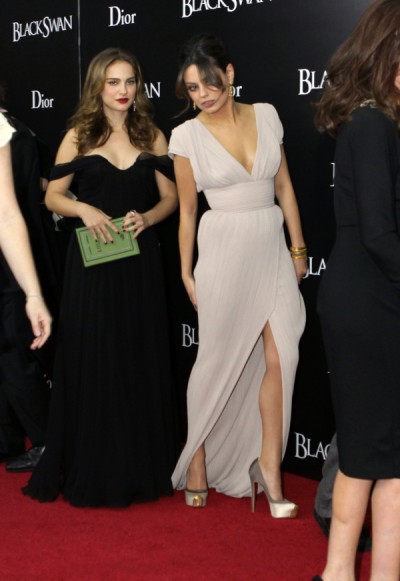 Natalie Portman married Benjamin Millepied in Big Sur over the weekend in an intimate ceremony in front of 100 guests including Ivanka Trump and Macaulay Culkin. If Culkin’s presence wasn’t odd enough, the absence of Natalie’s Black Swan co-star, Mila Kunis, was even weirder. Did Natalie have to make a choice between friends? Did Mila opt out of the ceremony because of Culkin’s recent drug allegations? Or simply, was Mila just not invited?

It was a small wedding so it wouldn’t be the biggest deal if Mila wasn’t invited but she and Natalie struck up a pretty strong friendship during the movie that made the women Oscar nominees. And Natalie and Benjamin met on the set of Black Swan which makes the co-stars’ bond even more special regarding the wedding. I have to think Mila found out Culkin was showing up and decided it was best for all if she got out of dodge. Especially since the media is reporting that Culkin’s alleged heroin abuse has a lot to do with his break up with Mila and the fact she’s now dating her That 70’s Show co-star Ashton Kutcher – WHO, coincidentally enough, starred with Natalie in No Strings Attached!

Page Six reports Ashton whisked Mila off to Bali for a romantic vacation last week so she has an alibi for not being at the wedding but that could have just been to escape the scrutiny. I’m sure she got an invitation well in advance and a heads up from Natalie that she was also inviting Culkin. Who knew Natalie and Culkin were such good friends? Us Weekly revealed the two have in fact been friends for years. It just seems like Natalie wouldn’t stand for a junkie friend, right? And especially not one around her kid. The National Enquirer is not backing down with its story that Culkin is buying a one-way ticket to the morgue with his reckless heroin addiction. It said he’s been using even more because he’s so heartbroken that Mila has moved on with Ashton. Those two have been joined at the hips in recent months and are finally coming out as a couple. If Mila went to that wedding, you know she would have brought Ashton. Can you imagine what would have happened if that went down?

The more I think about it the more I’m convinced that Mila chose to stay away. I wish she wouldn’t. If Culkin’s doing as bad as people are saying I wish she’d slap the sh-t out of him and help him out. They dated for 8 years! Clearly, she has the right to do that. But it isn’t up to her alone. I can’t saddle her with the responsibility. I have a feeling his drug use (however, small or large) was probably the catalyst  for her leaving in the first place. If he wouldn’t ditch the drugs to make her stay why would he ditch them to make her come back?

Do you think Mila ran off to Bali with Ashton so she wouldn’t create a scene at Natalie’s wedding? Also, do you think Culkin’s drug use is as full blown as the Enquirer is letting on?