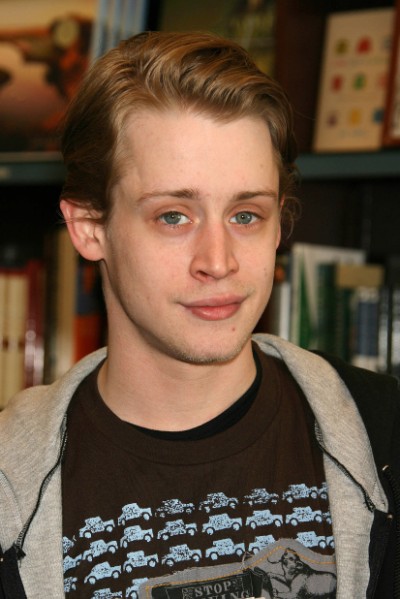 I love Macauley Culkin. I still think Home Alone is one of the best movies of all time and the go-to holiday movie to watch on Christmas Eve. The jokes only get funnier as we get older. So I feel like crap for writing this story. I’m damned if it’s true and I’m damned if it’s not. The National Enquirer outs the reclusive actor for his out of control heroin and prescription pain medication habit and says Macauley is likely to die if he doesn’t get help soon.

So we’ve all seen the photos of Macauley lately. He looks like sh-t. He’s too skinny and appears a little out of it. The pic I posted is close to six years old when he was still dating Mila Kunis. He looks healthy and still relatively upbeat. But friends are telling the Enquirer that after breaking up with Mila a year and a half ago, Macauley started spiraling out of control. Radar Online reports:

“Macaulay Culkin is hooked on drugs and it’s killing him!” said a source close to the star told the Enquirer.

“He’s been hooked for a year and a half, and his drug of choice is either heroin or oxycodone. Mac is surrounding himself with junkies and lowlifes. It’s a real tragedy.”

Another close friend claims to have witnessed Culkin’s increasing drug use and said his friends are afraid for his life.

“Macaulay Culkin is surely dying. He’s addicted to heroin, oxyco done, Percocet and Vicodin. I have witnessed his drug taking, which has escalated over the past year and a half to the point where he needs serious help.

“His closest friends fear that he’ll overdose or his heart will explode. If he doesn’t get help and enter rehab now, he could be dead in six months.”

The friend told the National Enquirer that they hoped he would get help before something tragic happens. “It should have been a wake-up call, but it didn’t seem to have any effect on him. Mac is still partying hard. I pray that he finds the courage and strength to clean up before it’s too late.”

Those of you who have been reading me for awhile know I’m no fan of the Mila Kunis, Ashton Kutcher romance and have been pining for Mila to get back together with Macauley ever since they parted ways. They dated for eight years! But he has to get his sh-t together before that happens. She can’t save him. Maybe that’s why she left in the first place? She’s never talked and Macauley is notoriously tight-lipped about his personal life. It’s just a shame because he’s so talented. Have you ever seen Party Monster? He’s amazing in that movie, although it’s probably not the best example to use under the current circumstances. I just hope this isn’t true! But I kind of suspect it might be. Macauley Culkin isn’t a huge draw, nor is he a celebrity that tabloids follow incessantly because he’s always good for a story (like Angeline Jolie or Justin Timberlake). Why make up a drug story about a person that the public always forgets about? I’m nervous.

What do you make of the Enquirer’s latest story? Are they just fishing to explain Macauley’s weight loss or is there probably more truth to this than not?