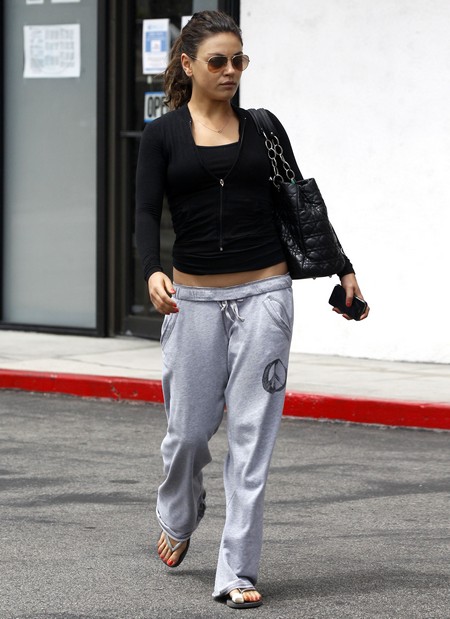 Oh Mila, Mila, Mila – I guess it’s undeniable now isn’t it? Go on girl; just admit it, you and Ashton Kutcher are an item. It’s about time right? Especially when the two celebrity stars were snapped sucking face this weekend at a party on Saturday. That’s what I like to call, ‘caught red-handed’.

The two actors, who played an on-screen couple for years on That 70’s Show, have been denying the fact that they are an item for quite some time, but it’s pretty apparent that they are into each other and are more than the just friends that they claim to be.

Back at the beginning of July they were spotted having lunch at LA’s Soho House, and according to a source, they were pretty touchy-feely.

“They were seated on a couch on the same side of the table and Mila was running her hands through Ashton’s hair. She had her elbow resting on his back and couldn’t stop playing with his hair and rubbing his shoulders. He leaned in and whispered to her and kissed her cheek. They were holding hands.”

And now this past Saturday, they were caught canoodling after attending Ashton’s wrap party for his Steve Jobs biopic “Jobs”.  Judging by this picture, it’s pretty safe to assume that love is in the air.  What do you think?  Are Ashton and Mila just really, really close friends?  Of are they playing coy with the media and secret lovers behind closed doors?